Month of the Man: 3 Steps to Startup Success for Tech Entrepreneurs - Black Enterprise 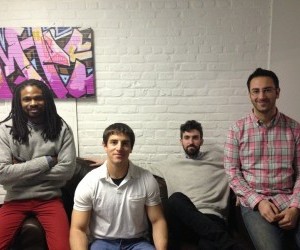 Elliott Breece is co-founder of Songza, a music streaming service that offers a smorgasbord of playlists for your mood, location, or current activity. You can tell Songza’s “Music Conciergeâ€ what time of day it is and what you’re up to (such as “entertaining cool friendsâ€ or “love and romanceâ€ on a Monday night), and it’ll select a few playlists worthy of being your soundtrack for the evening.

Breece launched Songza with Peter Asbill, Eric Davich, and Elias Roman in September 2011, and the service is now available on iOS, Android, and BlackBerry devices, as well as tablets and Sonos sound systems. As of March 2013, Songza reported having 4.7 million users, and the company has raised $3.8 million in its current round of funding, which Breece says isn’t over yet.

Breece, who serves as chief product officer of Songza, shared some advice for entrepreneurs and his thoughts on being a black man in the tech industry:

Don’t become attached to one idea. “Try a million things,â€ Breece says. ” One thing that I’ve personally done wrong in the past, that I think everybody does, is when they’re building things, they will really attach themselves to one idea. A model that makes more sense is to build things quickly, ship them or see if people are interested in them, and if they’re not, move on. I think a lot of times people will build one thing and spend years chiseling away at it, trying to make it something that works. I think that a model that is easier and a model that ultimately is more successful is build it, test it, and go from there. And if something doesn’t gain market acceptance, it’s generally time to try to pivot.â€

Two (or three) is better than one. Breece says that he always encourages people to have at least one co-founder. “Running a startup, there’s obviously peaks and valleys, and it’s great to have someone to rely on, someone just to be able to communicate with when things aren’t going well,â€ Breece says. “So whether that’s one co-founder or two co-founders, I think that’s really important. We got really lucky in that we all provide unique values. Each person does something well in a different area. It doesn’t always work that way, but in our case it did, and that makes it a natural fit.â€

“You need to build, and you need them to come,â€ he continues. “You need the customers before you can even talk to anybody. I think the reason that’s the case is because it’s become a lot easier to build things. A lot of people are starting companies. So because it’s become so easy, there are a lot more companies, that means for investors and potential partner companies, there’s a lot of options. I think it starts with trying to build something that’s compelling, that’s uniquely different, and going from there.â€

Learn the skills, have the advantage. Breece observes that while African Americans are overrepresented in social media, they are underrepresented in the startup world and technology in general. “The tragic part is that we’re very tech-savvy as a group, but the nuts and bolts, we’re not involved in,â€ Breece says. “Engineers make startups work. They ultimately are building the products. There are not nearly enough black engineers, specifically software engineers. I recruit [engineers] all day long, and they’re few and far between. Those sorts of professions are still pretty unglamorous in our community, but people are always hiring engineers, so it’s kind of a bummer that there aren’t as many African American kids going into engineering starting early, [in] the math and sciences in general.

“I guess the more glamorous part of it is starting a business and being an entrepreneur, but the best way to be an entrepreneur is to have the skills yourself,â€ Breece continues. “Trying to find an engineer is hard when you’re a funded company like we are; trying to find an engineer is nearly impossible if you’re not funded. So I think when you talk about black people being able to start companies, that’s probably the biggest problem. If you can look around and no one around you can build that that you need to build, then what’s going to happen?â€

On being a black man in the tech space. Breece doesn’t recall off-hand any negative encounters. “I don’t want to make it seem like it’s not something that exists,â€ he says, “but I also want to be honest about my particular experience.â€ Breece adds that while racism “obviously exist across America in every space,â€ one thing may help mitigate discrimination in the technology industry is success.

“We’ve been really happy with the progress that Songza has made, and the growth that we’ve seen, and so maybe that outweighs anything that I’ve seen,â€ Breece says. “There is no benefit in being a black male when you’re going into certain types of meetings. I think that’s safe to say. Me going into a meeting now as a co-founder and head of product of Songza, and a black male, I don’t have any problems navigating that.â€

And for black men trying to break into the tech space? “It’s no different than any other business in that you have to work a little bit harder than everybody else,” Breece says. “I think it’s a space that’s ripe for an influx of diversity, because technology is not diverse at all. We’re really underrepresented in this space, [as well as] women.”

Halle Berry is Having a Baby Boy