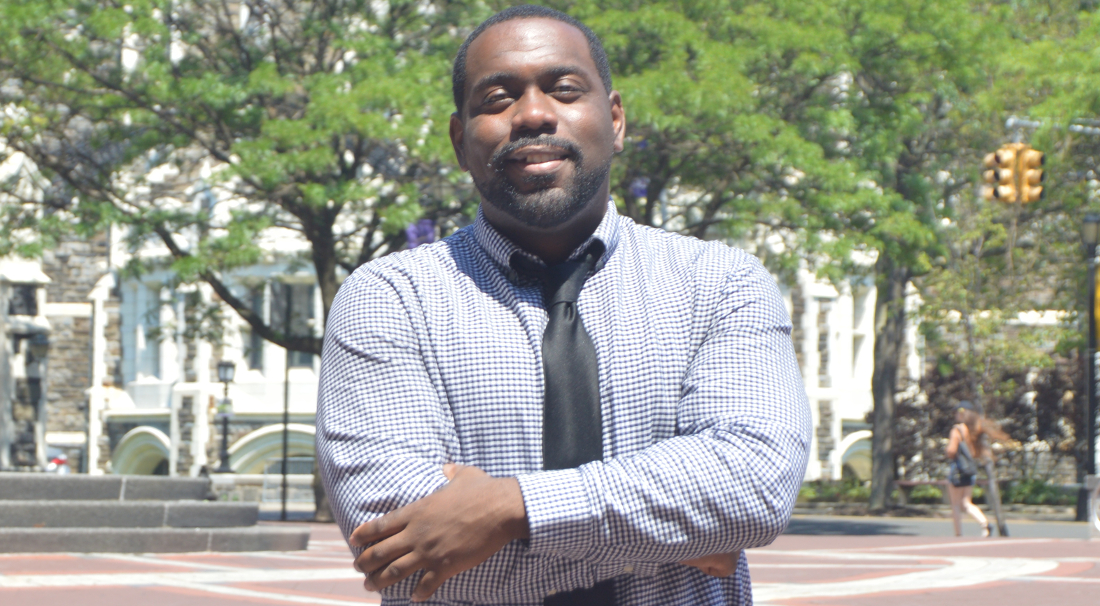 One Word That Describes You: Advocate

Fritz: What does this mean to me? Well, to quote our Vice President Joe Biden, this selection is a ‘big f****** deal!’ I have had the privilege of knowing and working with some amazing people— men who leave me in awe of their accomplishments and passion for greatness, leaders that challenge and inspire me. To know that I could be in a list with some of these same people is a humbling experience and confirmation that my work is having an impact.

It also means that there’s a chance some kid in East New York will find this. They will see that someone from their hood is striving to be a positive force in this world. If that kid is anything like I was back then, they will roll their eyes and start plotting for the day they’re on this list.

It doesn’t matter if we’re going to be friends, colleagues, rivals or lovers. If we’re going to have any kind of relationship you have to challenge me. I love people who inspire me. You get double cool points if you make me think. I love discussing politics and social issues, but I have a strong personality and can come across as a bit overpowering. I love it when I meet someone who isn’t afraid to push back, or teach me something new. I think that’s why I love my girlfriend so much. She’s one of the smartest people I have ever met, and I’m constantly learning and growing from being around her.

I have a few projects in the works. I just created a Political PAC  (New York Caucus for Political Action) with two good friends. Our goal is to raise money and fund candidates of color to run for office. We want to make sure people who look and sound like us have a pathway into policy making and legislation.

Along with that, I’m about two more episodes away from finishing the first season of a web series titled, Confessions of a Sucker for Love. I wrote the entire series, which is a spin-off from my second book.

Finally, I started working on my third book. I haven’t figured out a title yet, but it will follow the path of a young man who graduated from college when Obama was elected president. There are a million books about the millennial experience, but very few about the black millennial experience. I plan to change that.

The best advice I ever got wasn’t even real advice. When I was 15 years old I was having an argument with my father. I told him that one day I wanted to become president of the United States of America. He laughed at me and said, ‘You’re a black man. This world wants, and expects for you to fail.’ He wasn’t trying to be mean or hurtful. He was just trying to prepare me for a world that would always be a bit harder because of the color of my skin. I took his comment as a challenge and everyday I fight tooth and nail to be more than what the world expects of me.

The only thing stopping you is you. Sure, there are certain things that will always be out of your control, but you don’t need to stress over things that you have no power over. Especially when you can move the needle on the parts of your life you have a say in. Go as far and as hard as you can, and when you feel like you have gone as far as possible, go even further.

I know this sounds corny, but I try my best to never get caught unprepared. What that means is that I’m always prepping, or training myself for some new challenge, or invisible opportunity. When that opportunity arrives, I usually have a strong idea of how I would like to approach it. One of the most effective things I ever did was start preparing talking points. With 3-5 talking points I can go into almost any presentation and feel confident that I can deliver a strong message.

Honestly, I haven’t gone on many vacations. But last summer, I spent the weekend in the country with some friends. I had no cell phone reception and no access to internet. I spent the weekend laughing with good people, eating BBQ and spending time with my girlfriend. It was the highlight of my summer!

I went to San Francisco, California, last year and I absolutely loved it! If I could choose somewhere to live, it would probably be there or Colorado. As far as traveling, I would love to travel through Africa. A good friend of mine visited South Africa and she always raves about how beautiful it is. I would like to see for myself.

First off, thank you so much for including me in this list. Since I have the spotlight for a moment, I would like to point out that I would not be the man that I am today without the love and support of strong black women. Black women are the pillars of our communities, the heads of households and the innovators of the next generation. There is no such thing as a modern man without an exceptional black woman helping him get his self together and teaching him a thing or two.

Why the U.S. Has a Student Loan Crisis and Sweden Doesnâ€™t