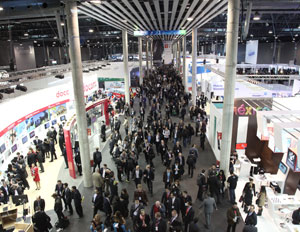 For four days, the newest smartphones and consumer electronics will compete for your attention.

Today through Thursday, Barcelona will be home to the biggest names in the mobile industry for the Mobile World Congress. And on day one, there’s already a slew of news from the event. Here are just a few things to come out of Spain so far.

1. Nokia and Android, Together At Last

Targeted at developing nations, Nokia’s “X” family of smartphones is a little different from the usual Windows Phone device. That’s because they’re running Android, a strange move from the Finnish smartphone company purchased by Microsoft in 2013 for $7.2 billion.

The low-end phones have a Windows-like aesthetic, are devoid of Google services, and use OneDrive, Bing, and Outlook for storage, search, and mail, respectively.

The devices will be available in three variants and six colors, though not in the US, Korea, or Japan.

Sporting a 5.1-inch display, a fingerprint scanner, a waterproof design, and a 12-megapixel camera, Samsung’s newest flagship phone, the Galaxy S5, is bigger and better in almost every way compared to its predecessor. The phone will be available April 11, though no pricing has been announced.

3. Sony’s Getting Into the Fitness Band Game

FitBit. Nike. Jawbone. Your wrist has become a fitness tracking battleground, and the big players are looking to get a piece of the action at MWC. Sony’s revealed the SmartBand. It’s Sony’s first product that takes advantage of their Core fitness tracker, according to Chris Welch of The Verge.

It won’t just track your steps and physical activity, but music you listen to, places you’ve visited, and more. It’s one element of Sony’s “SmartWear Experience,” the company’s way of differentiating itself from the competition. The SmartBand is set to be released worldwide in March.

4. HTC Wants to Cure Cancer With Your Smartphone

Donating processing power to scientific endeavors isn’t new, with programs taking idle PCs and having them crunch numbers while their human users sleep. HTC wants to do the same with phones, and has partnered with Dr. David Anderson, co-creator of SETI@home and scientist at UC Berkeley to create the “Power To Give,” an app that uses processing power from charging Wi-Fi connected devices to battle AIDS, cancer, and Alzheimer’s disease.

All you need is the app and a compatible phone. Currently, phones in HTC’s Butterfly series of devices as well as the HTC One are compatible, with more on the way in the coming months.