Mobile Technology: A Vehicle for Economic and Social Empowerment 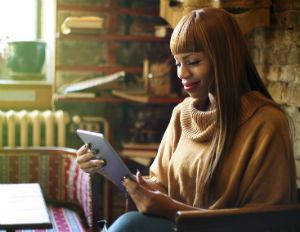 Mobile technology is a rapidly growing industry that is not only connecting people to information, products, and services right at their fingertips, but it is also providing its users with access to economic opportunities such as jobs and entrepreneurship.

Wireless innovation contributes $548 billion and 7 million jobs each year to the U.S. economy, creating tremendous opportunities for U.S. job seekers. Yet even as young African Americans have embraced mobile technology for social and cultural empowerment, they remain underrepresented in a sector that holds so much opportunity for economic advancement.

Luckily, tangible solutions to this ongoing issue exist–in the form of low-cost training, entrepreneurial classes, and exposure to personal connections in the field.

Our recent survey, Crossing the New Digital Divide: Connecting to Mobile Economic Empowerment, on which we collaborated with Mobile Future, indicates half of African Americans do not know a single person in their community who works in the technology industry.

These same women–millennials in particular–are among the highest adopters of mobile technology, yet young women of color demonstrate the least interest in pursuing mobile tech economic opportunities. When interest is demonstrated, it’s not in high-value coding and engineering but rather in mobile tech retail positions.

Further compounding the gender gap challenge is the fact that the women who stand to gain the most from the opportunities presented by mobile tech–non-college educated and unemployed women–are among the least interested.

Part 1 of a 2-part series by Cornell Belcher and Terrence Woodbury. Belcher, a frequent television pundit, isÂ the former pollster for the DNC & Obama for America and President of Brilliant Corners. Woodbury is a senior analyst at Brilliant Corners.

How Going Mobile First Gives Your Business a Leg Up