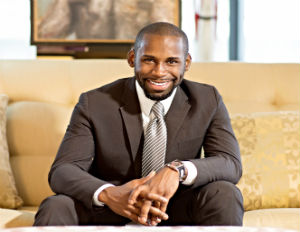 When 24-year-old Khyrie Alleyne was instant messaging his friend, the legendary Serena Williams, he had no idea an impromptu conversation would turn into the aha moment that launched Selfie Faze, a mobile app chat messaging application allowing users to create their own Emoji’s called #AnYCoNs.

“Serena asked how I was feeling and I sent her a picture of me wearing a sick-sad face. She responded “gross, ugh…yuck.” At first, I was a little annoyed by her response. I was feeling under the weather and of course she definitely made me laugh while hurting. Secondly, she did not realize I was telling her I was sick using my customized emoji, instead of the circular yellow emoji representing illness. But before I started to explain my intent, I began jumping up-and-down screaming, “Oh my gosh, oh my gosh I have to create Emoji’s of anything..”

With SelfieFaze, users have the option to chat in individual and group messaging. They can also transform any photo into an AnYCoN that can show its SWaGG (an accompanied written message) and tell its ViBE (an accompanied voice message). AnYCoNs’, SWaGG and ViBE, adds both depth and dimension to the chat-messaging world by telling each and every user to “Express Yourself.”

Black Enterprise caught up with the Brooklyn, NY native to learn more about his journey as a mobile app entrepreneur and success coach.

There are many people who dream of creating their own mobile app. How did you move from concept to execution?
SelfieFaze, underwent several phases; from concept, to design layout and name changes. In fact, SelfieFaze was conceived just days before its launch on the iOS market. Here is an overview of my design process:

Which skill was critical to achieving your goal?
Perseverance–When hope was hidden and every time defeat whispered ever so sweetly, I believed anyway. As clouds of darkness (negativity, hearing NO) would form and light began to fade, I had to search within to shine anyway! Lastly, instead of seeking revenge from those who laughed at, doubted and stole from me, I knew I had to love anyway! www.khyriealleyne.com

Did you use investors or your own money to develop Selfie-faze?
I used money from waiting tables as a restaurant server; funds from my graduate school scholarship and I was able to secure financial investments from close family members and friends.

Can you provide any tips or any lessons learned from marketing your app, working with developers and/or getting people to endorse your service?

Clearly define your vision. Write it down and make sure it’s embedded in your mind. Lastly, believe, act and say to yourself, until it becomes second nature, ‘No, “NO” Can Stop My Yes’.

With over 1.2 million apps in the App Store, how have you kept users engaged with your mobile app?

Pharrell Inks Deal to Publish a Series of Children’s Books

This Day In History: Toni Morrison Is Born