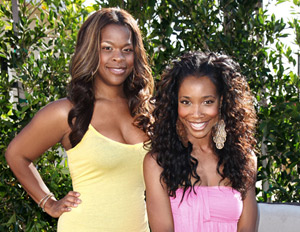 Monique Jackson and Kita Williams are not like most women who appear on VH1‘s popular reality TV programming. They didn’t get famous because of romantic affiliations with celebrities and they don’t throw drinks and fists. They’re about business from a professional standpoint. The PR and marketing divas behind the machine that is NFL star Terrell Owens boast over 10 years of branding experience for clients ranging from Ludacris to Bruce Willis, and expanded their expertise to television when they successfully pitched The T.O. Show. But it doesn’t stop there.

After receiving a flood of emails from young women and girls about various topics ranging from dating to hair, Jackson and Williams launched Define Your Pretty, a multi-service company that offers beauty and hair products, as well as mentorship to women around the country. Their mission is to show that there are positive Black women on reality TV and that it’s important to be a entrepreneur about substance. BlackEnterprise.com caught up with the busy duo to talk about the power of ownership, the motivation behind expanding their brand and why they feel there’s a lack of positivity on reality TV.

What exactly is the goal of the Define Your Pretty brand?

Williams: Define Your Pretty was something that was our child. We felt like it was our responsibility to show girls that you can be smart, talented and creative. It doesn’t matter whether you have the latest Louboutin shoes, or the latest Hermes bag–that’s not valuable. Monique and I want girls to know that we’re a business brand. We have a long resume of credible talents and smarts that got us to where we are today because of education and dedication. We want girls to know they know what it takes to be a CEO, an entrepreneur or even to be a person that’s on the right track ’cause of their own hard work, not because of who they’re married to, dating or sleeping with.

How did the beauty products work into the brand messaging?

Williams: Define Your Pretty is a movement and it’s the message that motivates these girls. We figure once you work on the inside, how do you work on the outside? Because, you can be a beautiful person on the outside but your own traits on the inside are all messed up because you don’t value yourself and because you value the aesthetics like so and so is on the cover of Cosmo. Monique and I decided to be our own brand. If we’re experts in creating financial revenue for our clients, why wouldn’t we do it for ourselves? So from Define Your Pretty, Monique and I had to define ourselves because we want to be pretty, successful business women so the brand now breeds beauty products because we decided to create the No. 1 thing that we, as African American women consume–that’s beauty cream and hair products.

How hard was it for you to get the line off the ground?

Williams: We spent almost a year trying to get this deal rolling because it’s harder for African American businesswomen to get into the hair business because the Asians have it on lock in all areas. I’m tired of us buying hair from people that don’t look like us. We’re launching our own hair care line, where it’s 100% virgin, it’s straight, wavy, curly and kinky. And it’s affordable to our girls. We wanted something that’s affordable so if you live in Alabama or if you live in Kentucky, you can afford our hair and it’s the same hair that we were putting on here so that is key. And then with that part of our purchases go to support the Define Your Pretty Camp.

What is the Define Your Pretty Camp all about?

Jackson: The camp is a place for girls who are dealing with issues. We joined forces with the United Negro College Fund. Education and financial literacy and all of that are important but you can’t move forward in any area of your life if you don’t feel good about yourself. So when we joined forces with them, we called it Define Your Pretty. We’re talking to girls about self-empowerment issues, image, just the day-to-day things that we go through as women in order to make our lives better–the tools we need and the characteristics that we need. Our camp right now is a day camp and our plan is eventually to do a weekend overnight-like type of camp situation.

What are some of your most important business tips for women trying to make it as entrepreneurs?

Williams: We have three business tips that we give women for building a successful brand. The first thing is having more than one financial stream of revenue [because] when one of your financial streams of revenue is pulled away–whether you get laid off from your job, you get fired or even if the money isn’t coming in the way it used to–if you have something else that’s bringing in some money you won’t feel so desperate if something catastrophic happens. That’s the first part of what we call the three Ps–passion, progress and profit. If you have a hobby make it a passion and you will progress. The second and third are, know your niche and play the part you want to become.

Speaking of becoming the part you play, you both are very vocal about the negative portrayal of Black women on reality TV. What are your thoughts on reality TV and women of color?

Williams: Why is it that we have to pull hair and fight to get on the mainstream shows? But, at the end of the day we feed into the image because if we have to act a little bit more belligerent or “ghettoâ€ then we’re going to act belligerent or ghetto and if we stop doing what they expect us to do then they’ll see women of color–people of color period–in a different way. We won’t look like animals acting up. We won’t have to be really obnoxious when the cameras are on. I think it’s unfair and if you think about the Basketball Wives they go to lunch, go to coffee shops, go to somebody’s house and talk about what they did and who didn’t show up and why she’s not talking to you. On our show we have real story content and it’s a story that unfolds over 10 weeks. Whatever is going on in our lives is not going to be resolved in one episode, it’s happening throughout. You see us doing all sorts of things but unfortunately there’s no substance there when you’re talking about who didn’t come to my bridal shower, who didn’t show up here or why you slept with my ex husband or why [are] you talking about me. That’s high school stuff! Monique and I really want to be known to change the concept and maturity of the way people see us.

Jackson: Unfortunately, the way society portrays us [as women of color] and the way we are being puppets in allowing ourselves to be portrayed, you know the catfights and the derogatory statements will be the ones left in because it gives the audience a wow factor. So if you are fighting to play because you can get a paycheck you will go the extra mile or two.

Is it safe to assume that you’ll be executive producing more shows with a positive spin?

Jackson: Definitely. We’re in the pitching business. We stumbled upon it by accident but we definitely have been bitten by the producer’s bug, the creative side bug, so we are looking to produce other shows.

Williams: We are the brown Kardashians with substance and I don’t mean that in any way with knocking [the Kardashians], but we use them as a prototype. We have real substance with how we got to where we are because the crazy part is Terrell can be Kim Kardashian all day long because it was Terrell that allowed us to showcase who we are because I believe everyone in life has a purpose. Terrell needed us just as much as we needed him. He wouldn’t have been able to pitch a show by himself. He would have never had the time nor the resources but we also realized that the Kardashians are a multimillion-dollar brand because they took their brand and made it a business. We would love to expand the brand of Mo and Kita, so you guys can see us outside of Terrell, kind of like Kourtney and Khloe. 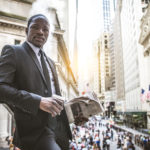 75 Most Powerful Blacks on Wall Street