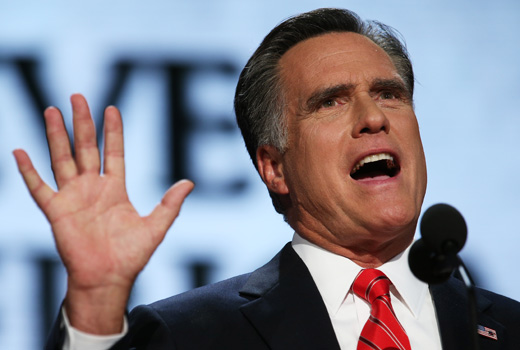 In his speech to a lively crowd at the Republican National Convention, presidential nominee Mitt Romney set out to deconstruct President Barack Obama, discrediting his handle on the economy and creating jobs.

“I wish Obama would have succeeded because I want America to succeed. But his promises gave disappointment and division,” Romney said.

Rather than aggressively attacking the president with accusations of gutting work requirements for welfare, Romney sought to use Mr. Obama’s 2008 election slogans of hope and change against him.

“Hope and change had a powerful feel. Shouldn’t you feel the same way now that he’s president?” he said. “You know there’s something wrong when the best feeling you had was when you voted for him.”

Romney also used the podium to share an abstract list of objectives as president, including repealing the Affordable Care Act, protecting the “sanctity of marriage” and establishing strict trading regulations. Romney also noted that he and Republican vice presidential nominee Paul Ryan have a plan to create 12 million jobs, although he gave no specificity as to how.

Gabby Douglas Told to Get a Nose Job by Gym Staffer