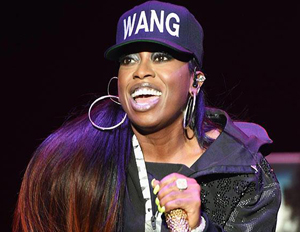 Missy Elliott still remains a trending topic since her show stopping Super Bowl performance. Currently theÂ music star’sÂ name alone returns 42,800,000 Google search results, while “Missy Elliot Super Bowl” garners 32 million.Â  She left such an impression that even post- “The Rain”Â era viewers who had no idea who the genius was praised her performance and declared that she was well on her way to stardom.

A very humble Elliott took to Twitter and shared how she was both flattered and humored at her “newly found” success: “the new kids think I’mÂ a new artistÂ & I’m bout to blow up [blank stare and crying laughing emojis] like Paul McCartney Lord ha mercy chile I love me sum y’all.” (The legendary Paul McCartney also gained a number of fans after his features on tunes withÂ Kanye West and Rihanna.)

Coupled with her God-given gift, perhaps it’sÂ this humility responsible for Elliott’s projectedÂ 1,000% sales increase. The day after the super bowl, iTunes tweeted that three of its top ten songs were by the artist. She also took the number one, two and four slots on Google Play, and her album Respect Me sold out on Amazon. Though she wasn’t the headliner, Missy managed to surpass both halftime stars Katy Perry and Lenny Kravitz.

According to Billboard, the expected 1,000% jump would equate to about 70,000, or more, downloads. Each of the hits Missy performed during the half time show aimed to sell 15,000 to 20,000 downloads per song for the week with “Work It” being the biggest buy.

Nielsen compiles and collects sales figures for Billboard’s charts and is said to release the figures today.