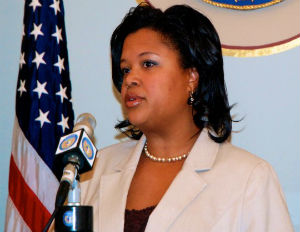 This week, Missouri state Sen. Maria Chappelle-Nadal has been making headlines with her heroic stance against legally protected bigotry. On Tuesday Chappelle-Nadal led a record-shattering 39-hour filibuster against a bill that would allow discrimination against same-sex couples.

The bill, SJR 39, would allow any individual or organization within the state of Missouri to legally discriminate against gays on the basis of religion.

Sen. Chappelle-Nadal argued that the bill was both immoral and unconstitutional, stating “This is a major scarring of equality in Missouri. We are living in an environment where hatred is alive, and we as a caucus are not going to tolerate it.â€

This is not the first time Chappelle-Nadal has attracted media attention.

The state senator represents the 14th District, which includes the city of Ferguson. After the killing of Mike Brown, Chappelle-Nadal took to the streets of Ferguson, joining other demonstrators to peacefully protest.

Her persistent outspokenness on the state of affairs in Ferguson drew national attention to the city, while theÂ expletive-laden tweets she launched at Missouri Gov. Jay Nixon drew the ire of both Republicans and some of her fellow Democrats. Chappelle-Nadal remained unapologetic.

In addition to her activism in Ferguson, the state senator has been extremely vocal on “sensitive subjects” such as white privilege and racism within the legislature.

She also keeps her receipts.

When Chappelle-Nadal found out she was being attacked with racial epithets on the Pro-Union St. Louis Facebook page, she screenshot each derogatory comment. After noting she had been a loyal friend to the unions, she shared the screenshots on social media, offering up a cash reward to whoever could identify the commenters, as well their place of employment.

While some naysayers have argued that Chappelle-Nadal’s methods are unbecoming of an elected official, their critiques miss the message behind the state senator’s unapologetic use of her public platform.

Women of color are often caught in demeaning circumstances where we feel compelled to silence in order to preserve our professional standing, so Chappelle-Nadal’s tenacity in standing up for herself and her beliefs are both refreshing and vital.