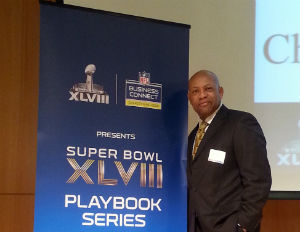 As the Denver Broncos prepare to face the Seattle Seahawks in Super Bowl XLVIII at Metlife Stadium in East Rutherford, NJ, one small business is hoping to win regardless of the outcome.

Niles Advertising & Display Solutions, Inc., a New York-based firm that specializes in graphic design and production, is one of the vendors retained by the NFL to provide services for the big game. A participant in the NY/NJ Super Bowl Host Committee’s Business Connect program, Niles Advertising was hired to produce printed displays and other promotional items for some of the week’s events leading up to the game.

The Super Bowl Host Committee, together with the NFL, in conjunction with Goldman Sachs 10,000 Small Businesses, developed the program to broaden participation among local minority and women-owned businesses in Super Bowl-related procurement and business development activities. As part of that, they invited such businesses to bid for contract opportunities.

“I received an email inviting our company to participate in the launch of the Super Bowl XLVIII Business Connect Program,â€ recalls Wendell Niles, president of Niles Advertising & Display Solutions. “We attended several Business Connect networking events in New York and New Jersey, and various business workshop that where sponsored by Goldman Sachs 10,000 Small Business and the Disney Institute. We eventually, received the opportunity to bid on four projects, and were rewarded two.â€

Before landing the contract (which were awarded on a competitive basis), Niles Advertising had to meet the following criteria:

For Niles, the deal was significant because not only will his firm receive recognition for its involvement on one of the biggest single sporting events in the world, but it opens up the possibility to repeat and attract new business opportunities with any of the 32 teams in the NFL.

“Now it’s not just about one game, we could get business year-round.â€

Maryland Home to Most Millionaire Families in USA; Tops in Black Families