Bogdan Vechirko drive a truck through a rally protesting the death of Georgr Floyd. Vechirko has been charged with making threats of violence, a felony, and criminal vehicular operation. Image: Youtube/@GlobalNews

A truck driver who drove into a crowd of hundreds of people protesting the death of George Floyd on a Minneapolis highway was charged with two criminal counts.

Prosecutors in Hennepin County charged Bogdan Vechirko, of Otsego, with one count each of making threats of violence, a felony, and criminal vehicular operation, a gross misdemeanor. According to the Star Tribune, prosecutors believe Vechirko attempted to scare protesters out of his path and that he had more than enough time to stop before he reached the crowd.

Vechirko told authorities that he was returning from a fuel delivery in Minneapolis and it was not his intent to hurt anyone. Police blocked entrances on the highway to keep protesters safe, but Vechirko was able to get onto the 35W Interstate bridge in Minneapolis that runs over the Mississippi River, due to an unblocked entrance, which still has not been explained.

A similar incident occurred in Seattle in June when Nikolas Alexander Fernandez drove into a crowd of protesters and fired several rounds from a gun as he tried to flee the scene. Fernandez was charged with one count of assault in the first degree, a class A felony.

In 2017, James Alex Fields Jr. intentionally drove his car into a crowd of counter-protesters, killing one person and injuring 19 at a Unite the Right rally in Charlottesville, Virginia. Fields pled guilty to 29 of 30 felonies and was sentenced to life in prison.

Vechirko’s lawyer, Mark Solheim, told the Tribune he “relied on his professional instinct and training to avoid a hard brake that could have jackknifed the truck and could have seriously injured or killed thousands of people, and instead slowed his vehicle while maneuvering through the parted crowd.”

No one was killed or seriously injured in the incident but one woman reported having abrasions due to her efforts to get out of the truck’s path. None of the protesters who attacked and injured Vechirko were charged. Vechirko’s wife said he suffered cuts to his face and his cellphone and wallet were stolen from the truck. 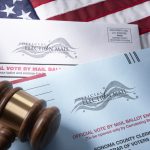 Florida and Alaska Voters Receive E-Mail Threats Stating “Vote For Trump Or Else!” 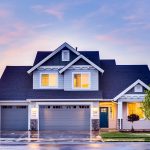