Minimum Wage Increase to Hit These 10 States in 2013 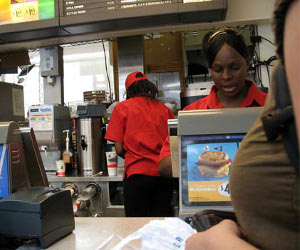 Nearly a million of the lowest-paid American workers are looking forward to New Years Day due to a small increase in minimum wage planned by 10 states. This increase is part of a cost-of-living adjustment that accounts for inflation.

Washington State, after a raise of 15 cents, will have the highest minimum wage in the nation at $9.19 per hour. Other states raising their minimum wage are Arizona, Colorado, Florida, Missouri, Montana, Ohio, Oregon, Rhode Island and Vermont. The last raise to the federal minimum wage came in 2009 after being signed into law by President George W. Bush.

Business associations such as the Chamber of Commerce tend to oppose federal as well as state hikes to the minimum wage, arguing that they’re unfair to business owners and force them to cut back on hours for workers. Lobbying groups for the National Restaurant Association have successfully kept the minimum wage for servers and other tipped employees at $2.13 per hour, a rate that hasn’t increased in nearly 20 years.

Experts predict that as many as 855,000 workers would see an immediate raise when these new state minimums take effect.