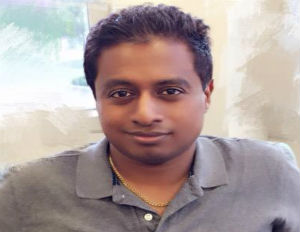 Vijay Chokal-Ingam, the older brother of actress and comedian Mindy Kaling, is making headline news after revealing he pretended to be a black man to get into medical school.

When initially applying to medical school in 1998 and 1999, Chokal-Ingam says he found himself wait-listed at the University of Pennsylvania, Washington University and Mt. Sinai. This then prompted him to apply to schools while claiming to be black. Now, Chokal-Ingam is chronicling his experience as an American-Indian who posed as a black man on his website Almost Black, where he also writes about his anti-affirmative action stance.

“I shaved my head, trimmed my long Indian eyelashes, and applied to medical school as a black man. My change in appearance was so startling that my own fraternity brothers didn’t recognize me at first.Â I even joined the Organization of Black Students,” said the 38-year-old on his website.

After changing his identity, Chokal-Ingam said he interviewed at eleven prestigious medical schools across the nation including Harvard, Columbia, Washington University, University of Pennsylvania and Case Western.

He posted pictures of his invitation to interviews and acceptance letters on his Almost Black Facebook page on March 31st, which showed that he also changed his name to JoJo.

As JoJo, Chokal-Ingam also revealed that not everything worked out as planned, explaining that he faced racial discrimination as a black man.

“Cops harassed me. Store clerks accused me of shoplifting. Women were either scared of me or couldn’t keep their hands off me. What started as a devious ploy to gain admission to medical school turned into twisted social experiment,” he wrote.

The UCLA graduate is now working on a book titled Almost Black — The True Story Of An Indian American Who Got Into Medical School Pretending To Be An African American, which he says will discuss “social perceptions of race relations, affirmative action and competitive university admissions.”

In the end, Chokol-Ingam attended St. Louis University Medical School, but dropped out after two years. Since papers from the school were not uploaded to his Facebook page, it’s unclear whether or not he posed as a black man when applying to the school.

What do you think of Kaling’s brother efforts to pose as a black man to receive educational gains? Do you think academic standards are lowered for black scholars when compared to other racial groups? Sound off in the comment section below.