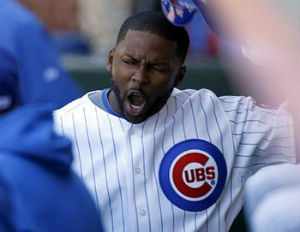 Looks like Milton Bradley’s temper has gotten him in trouble again. The outfielder’s estranged wife, Monique, recently filed a police report with the LAPD claiming a verbal altercation in her house turned physical, according to TMZ.

This is the third time Bradley has been accused of physically attacking his wife. Both Bradley and his wife filed divorce petitions this year after Milton was arrested for felony assault in September 2011. He allegedly swung a bat at her.

Milton’s attorney Harland Braun told TMZ, “Milton denies hitting her and will cooperate with police. This is an ongoing, bitter divorce.”