Mike B.: Stylist to Stars Such As Diddy, Alicia Keys, Discusses Career 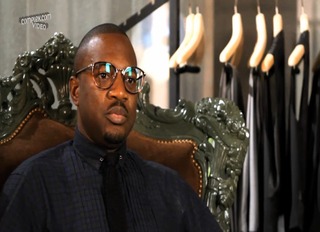 Mike B. calls himself the “Prince of Fashionâ€ because he says being the king would be lacking humility and indicates no room for more knowledge or growth.

The New Yorker of Jamaican heritage, was with Bad Boy Records for 11 years, serving in several different capacities during that time including intern, personal stylist for P. Diddy and the in-house stylist for all of the artists. He’s also worked with the likes of Swizz Beatz, Alicia Keys, Ne-Yo, Chris Brown, LeBron James and Nas.

“Being an image consultant is not just about personal shopping or styling for a video, it has more to do with branding that person’s lifestyle. You want that person’s friends and family to still recognize him once you’re done,â€ said Mike B. Â who is represented by Balan Inc., a luxury lifestyle management agency.

“NowadaysÂ you have people in the club with dark sunglasses on. That looks crazy, b. On the shortlist of people who could possibly get away with that is Diddy. He’s been doing it since the very beginning of his career. The glasses may have changed from Oakley, to Chloe or Gucci or what have you, but they are still there. That’s part of his personal brand.â€

Like most people in the style industry, Mike B.’s passion for fashion started early in life, though he did not go through the traditional route of Parson’s or FIT. Mike B. was introduced to fashion from his weekly shopping trips with his mother, but the streets were also a major influence on his personal style.

“My family was far from rich. Both of my parents worked two jobs, but they instilled creativity in us to make the most of what we had. A lot of the trends that caught my eye came from the culture of hip hop, running the streets and being around my older cousin. I was heavily influenced watching the drug dealers and hustlers and how they moved in the street,â€ explained Mike B.

The hustlers noticed him too. Mike B. was often sent downtown with those same hustlers’ girlfriends as a personal shopper of sorts.

“Let’s just say I was getting budgets early,â€ said Mike B. “I didn’t realize that I was styling or that I could actually make a living off of doing things like that. I was just being me. My boys and I would drape bed sheets on fences and do photo shoots with a polaroid camera mixing and matching different pieces from our wardrobes.â€

Even with all of that early exposure to fashion, Mike B.’s path to celebrity styling was not a straight one. He worked for UPS and as a sanitation worker before taking on styling full-time and he dabbled in street life as well, culminating in an arrest in the early 90s. Mike B. is not proud of his former street ways, but does not hide it and he hopes his story can help others.

“All of my experiences, good and bad, made me who I am today, so I can’t be mad at that and though I’m not proud of certain things, they happened,â€ said Mike B. “I want people to know that you can make mistakes and get beyond them and do better.â€

Mike B. acknowledges stylist Groovey Lew as his mentor and the person who brought him into the fold at Bad Boy.

“It was like late 90s when someone suggested to Puff to bring me on as a stylist because Groovey Lew had moved on to other things. At that time, the artists were Black Rob, Loon, Mase’s third comeback and others. Eventually I became Diddy’s personal stylist and the co-creative director for Sean John,â€ said Mike B.

But that meteoric rise was not without paying dues.

“I spent the first seven years of my career at Bad Boy as an intern. I was basically Groovey Lew’s assistant and did not draw a paycheck during that time,â€ said Mike B. “I was at Groove’s house at 8 am everyday. Interns today don’t understand that kind of grind. They want to be backstage and Instagram pictures of celebrities and go home. That’s not hustle. Go find something to steam, B.â€

Among his most prized accomplishments, Mike B. counts being Alicia Keys’ personal stylist for her casual post-baby looks, and styling Diddy when he was the co-host of the 2002 American Music Awards. As for advice to aspiring stylists, Mike B. says to always carry a notebook and pen and write down everything you see and hear; and also learn about the history of fashion in all aspects; not just one style or era.