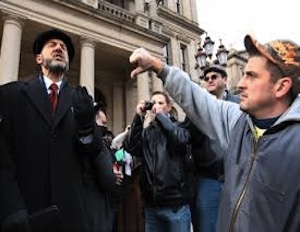 Workers employed in the public sector in Michigan received an unwelcome blow to union negotiations Monday.

The state, known as one of the union-friendly in the country, just voted to pass legislation that would make it a right-to-work state, thus becoming the 24th such state in the nation. All that’s waiting is the John Hancock from Republican Governor Rick Snyder, which he has already said he would readily provide to both public and private sector right-to-work legislation.

Right-to-work is a statue in the U.S. that prohibitsÂ agreements betweenÂ labor unions and employers from dictating to employees the level of involvement that an employee has to maintain in an established union. It includes not requiring employees to pay membership dues as a condition of employment either before or after hiring. The union still has to represent the employee if they decide not to pay dues.

The move has drawn the ire of thousands of employees who stood their ground outside of the Capitol building in Kalamazoo. More than 12,000 — 2,200 inside and 10,000 outside — protested against the legislation, which would strip some funding from the union.

The decision signals a wave of changing sentiment, primarily by Republicans, to labor unions. Organized labor has had difficulty remaining relevant in the past few years. Wisconsin had a major blow-out with the unions in the state and while they did not pass right-to-work did set the tone in which these types of discussions would occur nationwide. Michigan is particularly interesting in that it is home to the United Auto Workers, the richest union in the country, and has the fifth highest percentage of unionized workers in the country. Other states are keeping their eyes out to see how this will turn out, and possibly preparing to follow suit.

For more on Michigan’s labor dispute, head to Reuters.

Weigh Your Options: Pros and Cons of Being a Freelancer