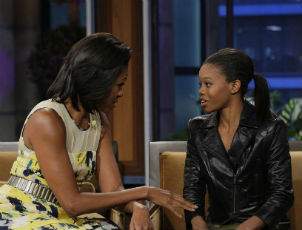 “You’re setting me back, Gabby,” Obama told Douglas during a taping Monday for NBC’s “Tonight Show,” according to a network transcript.

“Sorry!” replied the 16-year-old athlete, who confessed to chowing down on a McDonalds’ breakfast sandwich after winning two gold medals at the just-ended London Olympics.