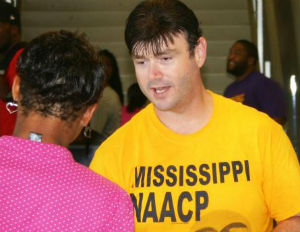 The first white president of a student NAACP chapter at a historically black college has died, according to the Huffington Post.

40-year-old Michael Teasley, who made news in 2010 when he was elected at Jackson State University in Mississippi, was found dead in his apartment.

He said that he became interested in the NAACP because of its economic concerns.

“I saw back then the gap between the wealthy and the poor, which was widening with the help of things like the Bush tax cuts for the wealthy,” he told the Free Press. “It was all economics with the NAACP. Also, the NAACP was the most prevalent organization on campus that was doing the most work on voter registration and economic awareness –Â and even teen-pregnancy prevention and the prevention of violence against women – issues that I’m very passionate about anyway.”

The cause of death is unknown.