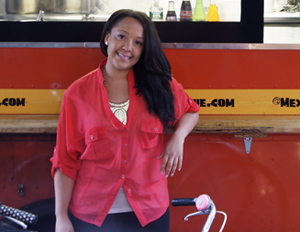 Julia Collins is a savvy, Harvard- and Stanford-educated businesswoman with a girlish air, a cheerleader’s charm and — perhaps most distinctively — a pair of large, fluttering eyes.Â During a recent interview one evening not far from her office in Manhattan’s Lower East Side, those eyes lit up as she discussed a potentially lucrative business opportunity that fit into all the criteria she considers when she evaluates if a project or venture is worthwhile.

“The only thing is I could be looking at 18-hour days,” she giggled, undaunted at the prospect. Equal parts giddy and practical about even the mundane particulars of the proposal, she casually took sips of a Cabernet from her native state, California.

Fearlessness runs in her family: Her parents, Chuck and Paula Collins are the principals of WDG Ventures Inc., the real estate development group largely credited with revitalizing San Francisco’s historically black Fillmore District. (Its portfolio also includes The Metreon and the Four Seasons Residences and Hotel). Mr. Collins is President and CEO of The YMCA of San Francisco and in 2008, Mrs. Collins founded the San Francisco-based consulting firm Portfolio Real Estate (PRC), which provides management services to corporations seeking to develop residential and commercial real estate.

Or maybe it’s because two years ago, her task was tough enough:Â Mexicue, perhaps an unlikely darling of the city’s highbrow mobile food scene during the sweltering summer of 2010, needed to stay solvent during the cold months. “Heading into our first winter, we knew we wanted to launch a catering business to offset the seasonality of the truck,” said Mexicue co-founder and CEO David Schillace. “Julia took the idea we had for catering and turned it into a million dollar business by signing some of New York’s most reputable clients such as Goldman Sachs, JP Morgan, Price Waterhouse Coopers, and Ziff Brothers Investments.”

With 55 part-time and full-time employees, Mexicue plans to open five restaurants in New York City within the next five years, then proceed with plans to roll out new locations in select markets across the country. In 2011, Mexicue reported $1 million in revenue and this year it expects to generate over $3 million in sales from its two brick-and-mortar sites, the truck and its robust catering business.

“Julia’s analytical skills, financial prowess, and entrepreneurial spirit have been an integral part of Mexicue’s growth,” Schillace says. “She has been a tremendous asset providing invaluable data that shapes the decisions we make to grow this business on a daily basis.”

In anticipation of Black Enterprise’s Women of Power Summit in Orlando, and in recognition of National Women in Small Business Month, Collins talked to BlackEnterprise.com about the business and the processes, philosophies and practices that will help to shape its future.

Wyclef’s Haiti Charity Goes Belly Up, With Little To Show For It