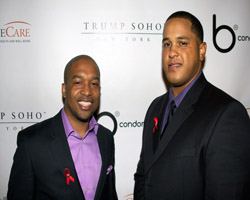 Co-founders, Jason Panda, Esq. and Ashanti Johnson, at the b condoms launch event at Trump Soho in NYC

Conversations surrounding sexually transmitted illnesses and the rise in new cases of HIV often morph into great concern; but, typically, they stop there. Such wasn’t the case for one group of young men. After engaging in deep dialogue about sky-rocketing HIV/AIDS rates, Morehouse College grads Jason Panda, Esq and Ashanti Johnson knew they had to do something.

That “something” was b condoms, a plush prophylactic brand that focuses on bettering sexual health practices in four main target audiences: African-Americans, Latinos, 50 and over, and gay and bisexual males. The letter b was chosen by the company’s founders to give the small business some flexibility when connecting with various partners. “You can say ‘b Latina, b African American, b gay or bisexual, b the Bronx, b Harlem, b what you are,'” says Panda, 31. Adding to the brand’s allure, sleek packaging andÂ a coolÂ company motto: “b cool, b safe, b yourself.”

The idea for the b condoms, which is distributed by PBJ Group LLC, began as a discussion Panda and Johnson had with other Morehouse graduates and friends during summer 2010. That idea blossomed into a business plan, and prompted theÂ pair to invest $50,000 of their own money, with contributions from family and friends, into b condoms, which officially launched on December 1, 2010. Since then, the FDA-approved condom brand has taken off, and, in order to sustain the budding business, Johnson resigned from his sales and marketing position at Johnson & Johnson, with Panda soon following suit, resigning from his job as a corporate attorney. On World AIDS Day (December 1), the business partners kicked-off an elegant event for their boutique condom company in partnership with VillageCare at the Trump Soho in New York City–an event appropriately themed, “b inspired.” The duo tapped into their extensive network, inviting power players within the entertainment, finance and philanthropic communities.

Today,Â b condoms has a five-member staff, comprised of urban professionals in nightlife, social media, entertainment, health care and business,Â and covering New York City, where Panda is located, Miami–Johnson’s locale–and Atlanta. Panda has even traveled to Malaysia, where b condoms is manufactured, to ensure they were producing a stellar product. “We felt it was extra important to go outside of ourselves [and] do that extra due diligence to make sure that what we [put] into our own communities is something that we cannot only hold our head high about, but also take pride in,â€ says the attorney-turned-businessman.

Panda and Johnson are aware of the challenges they face–discussing a taboo topic within urban neighborhoods, competing against well-established, big-name condom companies such as Trojan, Lifestyle and Durex and getting on the shelves of major retailers. But they’re determined to show it can be done. The urban chic brand’s classic condom is currently available in small stores in NYC ($3 for a 3-pack), but the company is looking forward to securing distribution deals for b condoms to be stocked in large retail chains such as Walgreens, Duane Reade and CVS. Until then, they’re working on offering the 3-pack on their web site later this month, as well as the 12-pack and wider selections in the near future.

In spite of the challenges, the business partners remain motivated by their goal ofÂ creating a startup that combats national HIV/AIDS rates in urban communities. “There are condom companies, definitely, but we just didn’t see enough condom companies that wanted to make a change in the trajectory of HIV and AIDS in our community,â€ says Johnson. Hence, why b condoms plans to reinvest a portion of its sales into organizations geared towards preventing the spread of STIs in our target communities.

In an effort to expand their message and product awareness, Panda and Johnson are always looking for strategic partners,Â including city, state and federal governments, as well as additional non-profit organizations and colleges and universities. Thus far, they’ve partnered with Bronx AIDS Services, Florida A&M University, the University of Southern California and Morehouse, which they worked with during this year’s National Black HIV/AIDS Awareness Day.

Associate Director of the CDC’s Division of HIV/AIDS Prevention, Donna McCree, Ph.D., MPH, R.Ph. thinks it’s great that young males have partnered up to work towards lowering the rate of the infectious diseases. “Despite the numbers, we know that prevention is working,” she says. “There’s still much more to do, but we know that it’s working.â€

For moreÂ  advice on how to launch your own business, read:

Why Black America No Longer Exists

In the News: Protesters in Egypt Rally After Release of Google Exec; Electronics Not A Factor in Toyota Acceleration