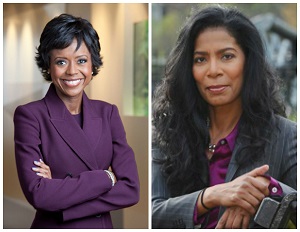 The anticipation continues for Black Enterprise’s 10th Annual Women of Power Summit, where power women across the nation will convene for three days of fellowship and networking. Added to the list of keynote speakers is the president of Ariel Investments L.L.C. Mellody Hobson, and the inspiration for Scandal‘s Olivia Pope, Judy Smith.

Hobson worked her way up from intern at Ariel Investments L.L.C. to president of the Chicago investment firm. Ariel is known as one of the largest African American-owned money management and mutual fund companies in the United States. In addition to her role as president, Hobson serves as chairman of the board of trustees for Ariel Investment Trust.

Aside from her work at Ariel, Hobson is chairman of Dreamworks Animation SKG Inc., as well as the director of The EstÃ©e Lauder Cos. Inc. and Starbucks Corp. Hobson is nationally recognized as a financial expert and has contributed her expertise in investments to the Tom Joyner Morning Show, Black Enterprise, and ABC’s Good Morning America. In 2010 she earned a spot on Black Enterprise‘s 75 Most Powerful Women in Business list, and in 2013 she was announced as one of Black Enterprise‘s Most Powerful Corporate Directors.

Standing alongside Hobson with her own CEO shoes to fill is Judy Smith. Recognized by many as the real-life Olivia Pope, Smith has paved a career for herself as an author, television producer, and CEO of the crisis management firmÂ Smith & Co.

Prior to founding Smith & Co., the Washington, D.C., native served in several high-profile roles including partner at a few Washington, D.C.-based nonprofits, and a White House position as special assistant and deputy press secretary to former President George H. W. Bush. She later broke into television as senior vice president of Corporate Communications at NBC, just to name a few. Her work in crisis management for many notable cases including Monica Lewinsky, actor Wesley Snipes, and NFL player Michael Vick caught the attention of screenwriter and director Shonda Rhimes, who developed the popular television drama Scandal inspired by Smith’s work. Serving as co-executive producer of the show, Smith offers expert advice and insights on how to portray crisis management issues on-screen.

With exemplary resumes that have catapulted them to become nationally recognized businesswomen, Mellody Hobson and Judy Smith will offer advice and business tips on how to take charge of your career at Black Enterprise’s must-attend Women of Power Summit.