Meeting Bill Gates: Student Has the Mental Discipline to Succeed 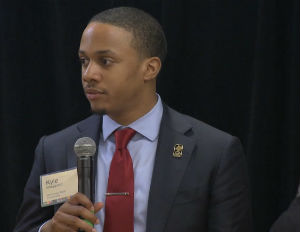 Whatever it takes to be selected to meet Bill Gates in person, Kyle Sheppard certainly has it.

Last month, the 24-year-old junior at historically black Delaware State University traveled to Seattle with a few of his schoolmates and the president of Delaware State, Harry Williams, Ph.D., to meet with administrators of the Bill & Melinda Gates Foundation. (Representatives from another historically black college, Johnson C. Smith, attended as well.)

The purpose of the meeting? To find out what’s working at HBCUs to retain students and get them to commencement day.

The postsecondary success team at the foundation, led by Dan Greenstein, also wanted to learnÂ about theÂ problems thatÂ get in the way of college completion, especially for first-generation or academically unprepared students, and how the foundation can support effective strategies.

Last week, I spoke with Sheppard aboutÂ his three-day visit, which included an extensive tour of the foundation’s campus and a jaunt to the nearby Space Needle tourist attraction.

Why were you selected to go?

I’m not really sure. I was included in an initial pool of 17 students. I think we were chosen based on availability and personal story–what the Gates Foundation found most compelling for its postsecondary success program. We did video conferences in which we told our story.

I’m not a first-generation student. My mother has a master’s degree, and my brother is a graduate of Howard. I went to a predominantly white institution for two years but then dropped out and joined the United States Air Force for three years. But then I decided to go back to school. I’ve never been a quitter. I’ve never been somebody who gives up. This wasn’t my mindset when I initially dropped out, but after being out of school for three years, I realized I’m somebody who thrives off of accomplishment.

I want to be a role model. I want to inspire others who feel as if they want to give up.

In the U.S. Air Force, I learned discipline, time management, decorum–how to act in certain situations. I think it was there that I developed the mental discipline I needed to succeed in school.

What happened at the Gates Foundation?

The Gates Foundation is a beautiful, state-of-the-art facility in downtown Seattle. We met with the administrators of some of the programs. We would convene in conference rooms, and each student–students from Delaware State and Johnson C. Smith–would share their story.

The Gates Foundation has been doing a lot of work at colleges, but now they want to see how they can best work with HBCUs–is it a retention issue? Judicial issue? Financial issue? Behavioral problems? Community issue? What exactly is it about students who come from these schools, and the ones that succeed; what have they learned from their experience?

For more about this meeting at the Gates Foundation, look for my interview with Hajira Attah,Â the student from Johnson C. Smith University.

How Investing Is Similar to Shoe Shopping