Fashion Has Heart Gears up to Dress Wounded Veterans 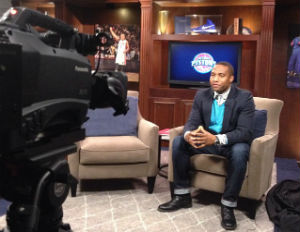 Called simply the Workshop at Macy’s, it is an exclusive vendor retail development program designed to give select high potential minority and female business owners the tools to better succeed and sustain growth in the retail industry.

Macy’s says, “The idea of the program is to build a pipeline of new entrepreneurs and resources that can benefit the entire industry. Helping companies acquire the tools and skills necessary to scale and really be sustainable in the industry.â€

Out of the 38,000 people who logged onto the website, Macy’s selected 1000 applicants for potential candidacies. In the end, only 12 were picked to participate this year.

One of the 12 is Michael Hyacinthe, a U.S. military vet, with an eye for fashion and a head for numbers.

After leaving the United States Navy, where he was enrolled with a special unit of the construction battalion called the SEABEE, he founded Fashion Has Heart, a lifestyle brand located in Grand Rapids, Michigan. Fashion Has Heart gives wounded vets the opportunity to express themselves creatively by transforming their thoughts into actual designs. Their designs are turned into footwear, apparel and bags.

“We just basically give veterans who’ve sacrificed on behalf of this country the opportunity to participate in the freedom of creativity,” Hyacinthe says. “My wife’s cousin was killed in combat and I wanted to figure out how to keep his memory alive and give other wounded veterans the opportunity to pursue their creative aspirations.”

May is National Military Appreciation Month. During the month, Americans are encouraged to honor, remember, recognize and demonstrate their appreciation for the sacrifices and successes made by service members throughout the years.

The Workshop at Macy’s program, which just wrapped up its fourth year, takes candidates who own retail businesses that show blazing potential and makes them better.

Though the candidates are schooled in the business of retail, and given invaluable lessons on retail math, by Babson College, “the number one entrepreneurial college in the country”, the program is completely free.

Hyacinthe, who is originally from the Bronx, New York, remembers how he became involved with the exclusive and prestigious program.

“We were actually looking online for different ways to reach different audiences. We read about the Macy’s workshop, we applied. Thousands of individuals applied, we were very fortunate that we were one of the top 12 to be here today and pitch,” he says.

He talks about the four and a half days spent in the program and what he found invaluable.

“We learned the business of fashion and the business of Macy’s. Just understanding the whole element of manufacturing, cost whether it’s retail, wholesale, things that we already had a sense of, but now how to apply it with a large consumer or merchant like Macy’s. It just opens you up.”

Now that the program is over, he looks back at a week well-spent and the camaraderie developed with his classmates.

“The most valuable thing from the workshop apart from the classes were the workshop members. Just because they relate from so many different backgrounds, their stories, their products. It is truly inspirational and I think that is the underlying greatest asset. Making friends, making potential collaborators. Because let’s be honest, a lot of us might not make it in Macy’s, but these partnerships that we have developed with these entrepreneurs can be priceless.”

He’s also looking to the future.

“Fashion Has Heart is an initiative which is just going to continue. There are 20 million veterans who have served and we are basically going to be the outlet for them to participate in the magic of creativity, be it through Macy’s or any other major retailer.”

Hyacinthe has also developed an app to help those in the military who have been badly wounded on the frontline.

Wimage or “Words to Images” is technology inspired by Fashion Has Heart’s work with wounded War veterans. The application will reportedly translate a person’s words into images.

HyacintheÂ says the program is geared toward individuals who are facing physical and/or creative limitations, and promises to give them the ability to express their thoughts and feelings through a visual medium.

Donald Sterling Threatens to Sue NBA, Will Not Pay Fine