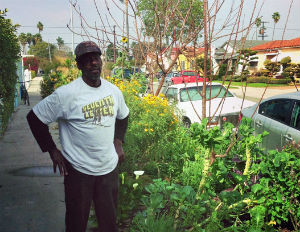 Ron Finley wants to help his community by changing the amount of young black children who are killed; not by drive by but by the drivethrough’s that are in the neighborhoods.

Finley, who has been dubbed the “guerilla gardener,” plans to plant healthy vegetable gardens in his Los Angeles neighborhoods. He started with his own home garden which the city of Los Angeles tried to prevent him from doing so. The win helped expand his efforts which enclosed empowering and educating those in his community.

He created the L.A. Green Grounds which was featured on TED.

“Finley has a message for those people in his community: Put down that Big Mac and “Get gangster wit’ yo’ shovel!â€