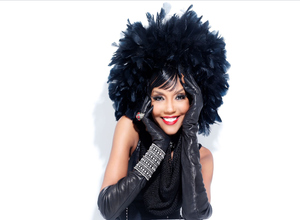 Behind this year’s Miss USA pageant, is LuÂ Sierra, a runway expert who coached fiveÂ of the top 10 ladies,Â including the second runner-up, Miss Hawaii, and the winnerÂ of Miss USA 2016, Deshauna Barber. As a former runway model, she successfully transformed her years of experience into a successful global runway coach business. Black Enterprise caught up with Sierra to delve into her life as a highly sought after pageant and runway coach.

Tell us about your journey from model to runway expert and pageant coach?
After moving to New York and getting lots of “no’s,â€ I finally got an agent, but they didn’t believe in my high-fashion potential and kept me booked as a show room model. I wanted to do high fashion so I decided to go to Paris. Once I hit Paris, things took off. My first runway was with Pierre Balmain–through working with him, I worked closely with Givenchy and it taught me about formulating a relationship with a fashion ICON and being a muse to such an amazing man. Once you make it in Paris then, Italy uses you, then NY must use you. So when I got back to NYC I worked with Bill Blass, Oscar de la Renta, and Halston. But it was after working with Bob Mackie in New York City that I got the name “Runway Lu.â€ He allowed us to have personality in his shows and use my theater training.

When did you know this was going to be a business?

The coaching started as a surprise. A friend, a beautiful, tall, blond fellow model with Ford Models–was going on jobs and getting callbacks, but never landing the job. She asked me if I could give her some tips to help. I did and suddenly she was booking jobs. The booker of the agency asked her what she was doing differently. She told them, “Lu has been helping me.â€ The booker then asked me to start working with other girls at the agency.

In 2007, the Miss Universe Organization contacted me about bringing runway styling to the pageant arena: “We want the viewing audience to turn on the TV and think they are watching a fashion show,â€ is how they described their objective. I knew the first day on the job that I would need to add much more than just showing girls how to walk like a model.

What people take for granted is the main ingredient of being a top model–it’s the ability to stand out in a room full of beautiful women.

Modeling is not just about being beautiful. It’s about exuding confidence, personality with a poise that seems natural. This is what models have to do day-to-day on ‘go-sees.’

This is what I bring to the pageant world–inspiring effortless confidence.

Later, I realized I was meeting a need after the second year of working with the Miss Universe organization. I’d be invited to speak to groups of girls about the general pageant rules, etc. but, then I started getting calls from mothers of bullied or low self-esteem young ladies. These were non-pageant girls but their mothers realized that they needed to be inspired and mentored to reach their full potential. This is when I realized there was an additional audience that wanted my confidence and empowerment message. And now my business takes me around the world mentoring and coaching.