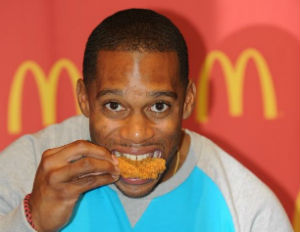 Giants WR Victor Cruz has signed a two-year deal with McDonald’s and will be featured in Spanish and English commercials for the fast food giant’s new Mighty Wings.

Aligning itself with the NFL and one of its most marketable players is an aggressive move for McDonald’s, which has started testing wings in select markets. With Cruz, the brand appealed to the Spanish and urban market. Commercial spots will also feature quarterbacks Colin Kaepernick and Joe Flacco.

From the Sports Business Journal:

The Spanish version of the commercial was scheduled to debut last night and will air on Univision, Telemundo, Azteca, UniMas, Mundo Fox, MTV3 and Discovery Galavision. McDonald’s USA VP/Marketing Peter Sterling said, “Victor celebrates his Hispanic heritage and we think that is a great way for us to talk to our Hispanic customers.”

Cruz, who is known for performing a salsa dance in the end zone after touchdowns, performs a different kind of dance in the spot for Mighty Wings. Sterling negotiated the deal for McDonald’s. IMG VP Carlos Fleming, Cruz’ marketing agent, represented the WR in negotiations.

“We are really excited about working with the NFL and being an official sponsor of the NFL,” Sterling said in a statement. “We are excited about these three athletes. I think they really demonstrate the fun and the passion of the NFL and what customers look forward to every weekend when the NFL takes over everyone’s conversation and dialogue.”

The 5 Best Bargains for the Fall Months

The Game and Drake Donate For Ohio Family Funeral Expenses