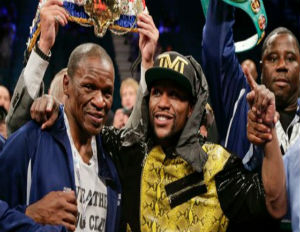 After Mayweather’s win on Saturday night, a meme surfaced on his Instagram of Oscar De La Hoya. The meme poked fun at De La Hoya’s substance abuse issues which he is currently in rehab for. After defeating Canelo Alvarez, who is signed under De La Hoya’s boxing company, the meme showed a photo of De La Hoya with the caption: “Meanwhile in Rehab, Oscar: I gave Canelo the wrong blueprint because I was high.”

“It’s unfortunate that a stupid picture was posted to my Instagram account earlier today that was not posted by me or authorized by me to post.”

He adds, “I completely support Oscar De La Hoya and his family during this difficult time in his life. I stand by him unconditionally and would never personally disrespect him or anyone else who struggles with addiction.”

“I apologize to Oscar and his family for this posting. I wish him well and am rooting for him to win his fight too.”

“I also apologize to all of my followers for this ridiculous post. I have no ill-will towards anyone.”

The 100 Best Wine Restaurants in America