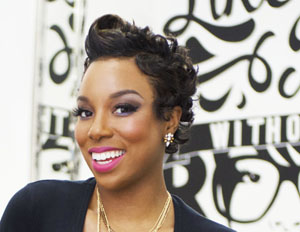 Your first salon, The Honeycomb, was overseas. How and why did you open a business abroad?

I got to Germany because my husband was in the military. When we first [got there], I opened a salon and it was doing so well when my husband [finished his military term], I didn’t want to come home. So we stayed in Germany for seven years.

German-owned establishments were really enthusiastic about doing chemical services. They would relax [hair] but the skillset wasn’t up to par, [especially for] American standards. People were showing up in Germany just desperate to get a [good] hairstylist …The HoneyComb just took off as soon as I opened it. It did really well. It was [in] a military community, [and] we worked with a lot of local and national [clients]. I had some German newscasters [as clients] and anyone who had [natural] hair, I was pretty much working with them.

Was the entrepreneurship process abroad difficult, and did you have any fears or reservations starting your business there?

I literally had to go from salon to salon and ask questions. [I had] to build relationships and just find out what the basic fundamentals of doing [business there] would be.

It took me some time to realize that what I was trying to do wasn’t the norm. It wasn’t just “Oh, I want to open a business. Let’s do it.’ Â I needed a lot of [official] approvals.

I think that’s what made it difficult, [but] I wasn’t afraid to do it. The interesting thing about being American and going somewhere else is we just expect those things to happen. I just went in there like, ‘Why not?’â€ The audacity of hope is very much an American thing. At first I got the door slammed in my face so many times because they couldn’t figure out why I wanted to try.

Well, you tried and it has definitely all worked out. What are some of the things that make the Doux so unique?

Every client has their own appointment, so our pricing and everything around the service is based on that experience rather than just the service.

People are in and out in less than an hour. We talk a lot, we listen a lot and we give a lot of instruction.

What does the future look like for you and the Doux?

The Doux product line launches again this summer, and we’re really excited. We put everything on pause because we felt like it was important to get everybody into our brand environment. To really understand what the products do, you have to be here to see what kind of brand we are, so I decided to open the salon first and give people the Doux experience, then launch a product line.

We will be launching Doux Rags as well, which is our hair accessory and head wrap line for people with [all types of] hair.

I’m really hoping that the Doux concept will be able to be in multiple locations in all the places that it’s needed.

Buying vs. Renting: The Pros and Cons