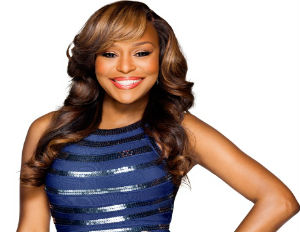 When it comes to reality TV, most people would agree there is a formula for success–drama, betrayal, suspense and more drama. But beyond name-calling, glass throwing and fighting, there are some reality TV celebrities like Quad Webb-Lunceford from Bravo TV’s Married to Medicine, who know more than a thing or two about monetizing reality fame. As Brand Ambassador for BCBG Max Azria and owner of Picture Perfect Pups, luxury apparel and bedding line for canines, the ambitious starlet is very busy these days building partnerships and product lines.

“If you’re going to join the cast of a reality TV show, be assertive and have a crystal clear plan as to what you want out of it. Yes, the drama is a part of the formula to get people to watch the show. But try not to get so wrapped up in the drama. Don’t just be okay with being a part of the show. If there is someone around you making money off of you, then your question should be, “Why can’t I make money off of me?â€ says Lunceford.

BlackEnterprise.com caught up with Lunceford to chat about everything from running a business to preparing for a new season of Married to Medicine and balancing family-life.

BlackEnterprise: Tell us about your background.

Lunceford: Prior to joining Married to Medicine, I was working in the Medical field. I have a degree in Biology with a Minor in Chemistry.

When I was younger my parents told me I should be a Doctor or a Lawyer, so believe or not for the longest time I felt like I was going to be a Pediatrician. So it’s really funny when I hear people say I don’t want to have kids. My response is always “No my dear, Quad is ambitious, I want to make sure I have everything lined up for my child.â€

Right now I am really running a race trying to make a career in entertainment.

What were your initial intentions when you joined the cast of Married to Medicine?

This was really an opportunity for me to allow my light to shine. I’m always up for a new task and I have a fear of being average. It’s my goal to be extraordinary. I’ve always held these beliefs about myself but I never knew what the outcome would be. So naturally when I was approached about reality TV it made sense for me to join the show. When you know millions of people will be watching you, it’s an opportunity for you to take an idea and turn it into something that is tangible–something that you can create and sell.

8 of the World’s Most Powerful Women You Should Know