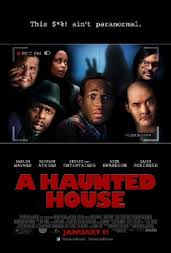 Marlon Wayans is holding his own among top money makers in Hollywood as an actor, writer, and producer. Since the ‘80s, he has collaborated with his brother Shawn, having penned some 7 films that have grossed over $685 million at the box office worldwide.

It was the Wayans Brothers who gave birth to the Scary Movie franchise, co-writing the first installment which topped $278 million worldwide on a $19 million budget, while Scary Movie 2 grossed $141.2 million (read “Hollywood’s Most Bankable Black Producers,â€ December 2012).

Now, Marlon’s flying solo in his silver screen production debut of A Haunted House, a send-up to horror films such as the Paranormal Activity sequels. He co-wrote and stars in, along with Cedric the Entertainer and Essence Atkins, the horror comedy which opens in theaters January 11th. The idea for the film came to him after pondering what if a black couple moved into a house that was ghost-riddened. They started hearing voices and seeing things flying in the air but chose to stay. Black people probably wouldn’t he thought but what would happen if they did. That’s A Haunted House.

Wayans, 40, is the youngest of 10 brothers and sisters. When you’re born into a family of comedians funniness pumps through your veins. A graduate of LaGuardia Performing Arts High School, entertaining has always been innate for him. Blackenterprise.com caught up with Wayans to discuss flying solo as a producer and being a beast when it comes to thriving in Hollywood.

BE.com: Congrats on your first solo venture, A Haunted House, which you co-wrote and produced.

MarlonWayans: I got to watch [the film] with a live audience and it was great, because they were cracking up at all the right places. The trailer is funny but those are the least funny moments. The film is hilarious.

Was there ever a time in your life that you were spooked by scary movies?

Yes! Freddy Crooger. When I’m watching it with my kids I’m like hiding behind a pillow telling them it’s not real. Also, that movie Friday the 13th. I don’t do ghost-murderers.

How does it feel tackling the horror comedy genre this time around without your brothers?

It’s great because of standup I have built in my head about what is and isn’t funny. I have the audience in my head and my maturity as a writer and producer is that the jokes will get done but you have to hire the right director. We lucked up with Rick Alvarez. This movie is my Janet Jackson “Control” project – stepping out on my own.

Has it been a tough transition working without your family?

Not at all. My family supports what I do. I’m a big boy now and they’ve taught me a lot. I’m venturing “out” not “off.” My family knows I’m accessible whenever to do whatever and get it cracking.

Do you think going it alone will affect the Wayans brand?

No way! I finally had the time and space to do solo [projects] and I’m at the age that I want to do it. I love working with my family. I’m not the Bobby Brown of New Edition or the Sisqo of Dru Hill. We will never break up but we will work the brand because it’s a badge of honor. The more we grow individually the more we bring to the table when we come back together.

Have your son and daughter followed in daddy’s footsteps?

My son he’s into football, but is a natural as far as being a comedian; he does great impressions of people. I try to encourage him to pursue it. But my daughter, who is a great singer and acts, said to me, “Can I have something for myself? This is my life.” She even writes scripts already. They are both excellent students. So, I’m proud. Entertainment is the family business so if they ever want to pursue it seriously they are surrounded by [teachers].

You executive produced BET’s Second Generation Wayans. What can we expect?

A different complexion of [Wayans’] comedy but with our nephews. We’re making it more about the story. It’s like [HBO’s] Entourage. It’s funny.

What’s your next creative outreach?

I will play Sandra Bullock’s love interest (we don’t have sex, but in my head we [did]) in The Heat. I have another movie I wrote, produced and starred in that I’m pitching; an ABC pilot about an “inappropriate” dad, a couple of reality shows.

Weren’t you considered for the role of Richard Pryor?

I got the role, but I don’t know when it will happen. That’s one of the projects I hope to get done in the next couple of years.

Do you think the world is ready for Marlon Wayans?

I’ll say this. My brother Keenan groomed us to be beasts so there is no mystery. Whatever the budget, I can get it done. In this business, you have to be a force of nature and I’m prepared to be just that.