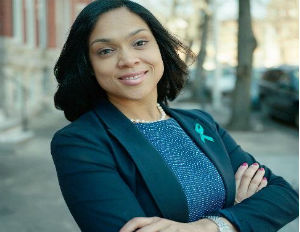 Following the aftermath of 25-year-old Freddie Gray’s death, protests and riots have taken place in Baltimore and across the nation in an effort to demand justice and answers for the police killing of another black life. On Friday, Baltimore City State’s Attorney Marilyn Mosby announced that Gray’s death would be ruled a homicide and all six officers involved will face criminal charges.

Mosby, who just took over as chief prosecutor in January, may be an unfamiliar name to many but her rÃ©sumÃ© speaks volumes to her credentials. Check the facts below that prove Mosby was more than equipped to handle a major case, such as Gray’s, after just a few short months in office.

1. At just 35-years-old, Mosby is the youngest top prosecutor of any major city in America.

2. She is a democrat who comes from a long line of police officers and has a history of being vocal about holding police officers accountable. A long-time friend and Baltimore-based attorney Richard Woods told NBC News, “She has a natural affinity for police officers and law enforcement types, and at the same time, she is aware of the incredible number of complaints against the Baltimore City police department.”

3. Mosby’s grandfather was one of the first African American police officers in Massachusetts.

4. Her passion to fight for justice stems from personal tragedies in her own life. When she was growing up in inner-city Boston, her 17-year-old cousin was mistaken for a drug dealer and killed outside her home by another 17-year-old.

5. At the age of six, Mosby was accepted in a school desegregation program in Massachusetts and later participated in a study of the civil rights movement. During her campaign, she said “After having that experience I knew I wanted to be an attorney.”

6. Mosby studied political science at Tuskegee University and was the first in her family to graduate college.

7. Her first stint in Baltimore City State’s Attorney came after she graduated from Boston College Law School. After working as assistant state’s attorney, Mosby then left to go work as a field counsel at Liberty Mutual Insurance.

9. Since her first day of stepping into office, Mosby made it clear that her mission was to fix the justice system. “As a black woman who understands just how much the criminal justice system disproportionately affects communities of color, I will seek justice on your behalf,” she said when she was sworn into her position in January.

10. Mosby is the mother of two daughters and is married to Nick Mosby, a Baltimore city councilman who has been vocal about the riots following Gray’s death.

“This is bigger than Freddie Gray,” he said in an interview Monday night with Fox News. “This is about the socioeconomics of poor urban America.” He added, the rioters were exhibiting “decades-old anger and frustration for a system that’s failed them.”

[Below: Watch Mosby’s press conference where she rules Gray’s death a homicide and announces charges will be pressed against the officers involved]