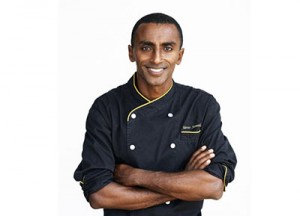 Award-winning chef Marcus Samuelsson is revolutionizing the culinary business and food justice movement–one fresh veggie at a time. While the seasoned restaurateur spends countless hours pleasing the palates of customers looking to dine (or sip) at New York City’s acclaimed Red Rooster and Ginny’s Supper Club, conveniently located in the basement of his Harlem restaurant, Samuelsson spends just as much time fighting to get Harlem noticed as an emerging market. As a chef of color, the Harlem resident felt obligated to move his team and venture uptown to help revolutionize the space both on the food business and activism fronts. “It’s about creating a movement, and showing that we [black people] can do it, too,â€ said Samuelsson at TEDxHarlem, a one-day interactive forum. “It’s about creating a platform where the anonymous black worker–the cook–becomes visible…I’m committed to having those meaningful conversations in the community.â€

In a neighborhood where bodegas and fast-food spots are mainstays, the author of New American Table is proud to have assisted in establishing a farmer’s market in his historic community. The movement has gone beyond the confines of the community and spread virally through Samuelsson’s food culture website Food Republic and MarcusSamuelsson.com, as well as his social media platforms. The Harlem resident’s social media footprint is sizzling–his verified Twitter account boasts over 51,000 followers; Facebook fan page has nearly 35,000 likes and he engages with a YouTube audience of 127,340 on MarcusCooksTV.

Samuelsson advises those looking to further their brand via social media to focus on quality, not quantity; in addition, to familiarize themselves with the space. “Know your space. Own that one space and be really, really good at it,â€ advises the Chopped judge. “The people will come to you. Today it’s not a matter of [the] people who are going to come to you, it’s a matter of how you draw them in.â€

The Chopped: All Stars winner is set to draw a crowd, taking the stage at the 2012Â Black Enterprise Entrepreneurs Conference + Expo hosted by Nationwide on May 24 at 12:30pm. The exclusive one-on-one conversation with Black Enterprise’s Sonia Alleyne is happening at the Hilton Chicago Hotel in Chicago, IL.

Follow the hashtagÂ #BEEC2012 on Twitter for the latest updates on conference speakers and sessions. Expect innovative sessions, high-powered speakers, and an early peek at the products, trends, and services you’ll need to stay ahead of the curve. To register and find out more, visitdev.blackenterprise.com/ec/