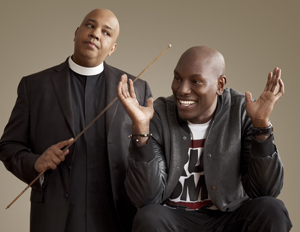 Manology gets into advising women on how men think when it comes to relationships. Why do a book geared to women vs. talking to the fellow men?

Tyrese: Rev said earlier, there are way more women in church on Sunday than men, and when it comes to reading books, research has shown that women are faster to pick up a book than men. … Women are more interested in learning and knowing and understanding men to the point of wanting to read books like Steve Harvey’s Think Like a Man, Men are From Mars Women are From Venus, the Iyanla Vanzant books, and books that Oprah Winfrey recommends in her book club. There’s millions of women out there buying books… What’s gonna surprise people about Manology is that we have a lot of things we’re directing at men specifically, even to the point of saying, ‘Ladies, if you’re in a relationship, you got your husband, and he’s over in the next room, I need you to put the book down, and go give [the message] to your man right now because this message is for him.’

Steve Harvey, and the success that he had with his book, really created an audience and a fanbase for these types of books. And what Steve Harvey said the other day, when we interviewed with him in Chicago, is his book touched the surface of advice, information and insight, and me and Rev went all the way and took this information to uncomfortable grounds and pushed the envelop in a major way.

Tyrese, in the book you also talk about validation, and how many men need it. With many women moving higher, career-wise, than men (going to college at higher rates, etc.) how do you respond to power women who feel like men should just step up to the plate, catch up, and support them?

I think when it comes to women … You don’t want your success, the money you’re making, the education you have, the goals and the missions that you have in life to become a repellent—like bug spray—to get rid of all men. Your confidence should be an extension of your success, but it shouldn’t be to the point where you’re intimidating men from even wanting to approach you. What I’ve learned is, the women who create this facade, it’s more of a defense mechanism to keep the bullsh** away. [As a man,] when you’re able to see through that, if you end up having one or two conversations, you realize that’s a part of their defense mechanism, because they’ve been hurt so many times, so if you can’t see through the confidence, and the repellent—the bug spray, so to speak— then you may miss out on your wife. … [A successful woman] is already intimidating out the gate because you have so many amazing and powerful things going. A man needs to feel needed.

Manology is about saying we have a problem with what women don’t know. The things you do know, congratulations. We love that you know it, but we want to help you in whatever way we can, as men who both have daughters … We want to protect you, guard your heart, and help you to translate things you may not understand about men.