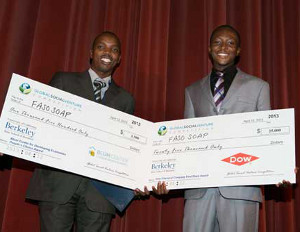 Two students have invented a malaria repellent soap that many believe can help save millions of lives in sub-Saharan Africa by preventing the transmission of malaria via mosquitoes, which currently accounts for 90 percent of deaths.

The students named their product Faso Soap. It is made from karate citronella and other herbs which grow locally in their respective countries. If marketed correctly, the soap will have an immediate impact in Africa, the inventors believe.

“We want a simple solution, because everyone uses soap, even in the very poor communities,â€ Moktar DembÃ©lÃ©, General Manager of Faso Soap said. According to the World Health Organization, in 2010, malaria caused an estimated 660,000 deaths, mostly among African children. Two African states, the Democratic Republic of the Congo and Nigeria, account for over 40% of the estimated total number of malaria deaths globally.

Most malaria cases and deaths occur in Africa, but people in Asia, Latin America and some parts of the Caribbean are also exposed to the risk of being infected.

More information about the winning teams can be found on theÂ GSVC Facebook page.