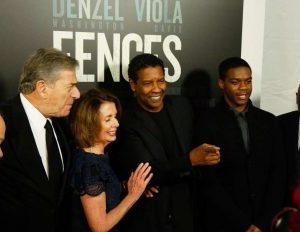 About two years ago, one of the world’s hottest Hollywood agents, Charles D. King, left behind his position at WME to start his own company Marco Ventures, centered at the intersection of content, technology, and brand curation. With a focus on creating film, television, and digital content for African American, Latin, and multicultural consumers, his brainchild has produced of one of the most profound movies of 2016, accompanied by heavy Oscar buzz.

Fences is an adaptation of a play written by August Wilson. Set in the 1950s,Â  the film stars world renowned actor Denzel Washington as Troy Maxson and iconic actress Viola Davis as his wife, Rose Maxson, as they come to terms with realistic, life changing events, that affect African American families even today. In addition to starring in the movie, it was also directed and produced by Denzel Washington.

Thirty-nine years ago, Washington came to San Francisco with $800 in his pocket and a full scholarship to the American Conservatory Theater. “I stayed at the Sheraton Palace Hotel for $35.00 a night, and I knew after the first night [that] I had to get out of there. I got a job at a restaurant immediately, so I could eat for free. By the next afternoon, I had a $150.00 a month apartment and worked at a restaurant called Salmagundi’s, which was literally across the street from the Curran. Thirty-nine years later, I’m standing here talking to you,â€ says Washington.

Check out Fences, in theaters nationwide on Christmas Day. Â

How Effective Is the â€˜Whyâ€™ of Your Business?