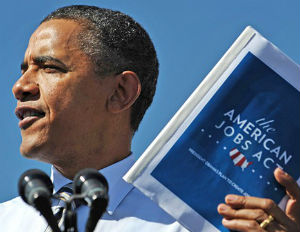 A new report from the National Employment Law Project, a research and advocacy group, has confirmed what many had long suspected.

Sure the economy is on the rebound, but low-wage jobs are driving the recovery. Many high-wage and middle-wage jobs have disappeared forever. In other words we have been replacing good jobs with bad ones.

With unemployment still more than 6%, an increasing amount of desperate Americans are accepting positions that pay less than what they are used to, with many falling out of the middle class and now being classified as members of the working poor.

The study also finds that there are a million fewer jobs in middle-wage industries than there were when the recession hit.

With thousands of jobs in the healthcare system, loan servicing and real estate sectors gone for good.

The report shows that low-wage job creation was not simply a characteristic of the early recovery, but rather a pattern that has persisted for more than four years now.

The New York Times reports that “Economists worry that even a stronger recovery might not bring back jobs in traditionally middle-class occupations eroded by mechanization and off-shoring. The American work force might become yet more [polarized], with positions easier to find at the high and low ends than in the middle.”

According to the New York Times The National Employment Law Project study also finds strong growth in restaurants and food services, administrative and waste services, and retail trades. Those industries–which often pay wages at the federal minimum– accounted for about 40% of the increase in private sector employment over the past four years.