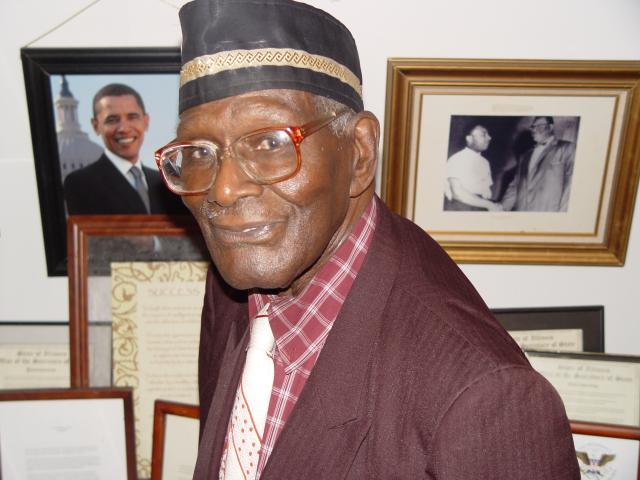 In Chicago’s Grant Park, Sen. Barack Obama, a Chicago native, could possibly accept the position as the first black president of the U.S.. For some, the thought seems inconceivable, for others the racial injustices of this country’s past seem light years away.

For one 96-year-old, the memories are real. After years as a public speaker and pastor, Rev. Marion Earle Sardon’s voice is crackly and soft but at the mention of the nation’s two most famous “community organizers,â€ Martin Luther King, Jr. and Sen. Barack Obama, his voice, though still hoarse, regains its vigor.

Sardon’s own work as a community organizer attracted Martin Luther King Jr. away from the Jim Crow South and Desegregation to witness the hostile racism of the North. King visted Chicago at Sardon’s behest in 1966. His visit was not pleasant. During one of his peaceful marches on Chicago’s Southwest side, residents threw rocks, knives and set fire to vehicles.

“I’ve been in many demonstrations all across the South,â€ said King. But I can say that I have never seen –even in Mississippi and Alabama — mobs as hostile and hate-filled as I’ve seen in Chicago. I think the people from Mississippi ought to come to Chicago to learn how to hate.â€

Today, Sardon and his flock have set aside the day to pray for the senator at their small church in Chicago’s impoverished and violence-filled Englewood neighborhood, but tonight, Sardon, will be watching Obama’s election night rally from home. His knees are weak so even if he had one of the 70,000 tickets that were distributed, he would not be able to stand among the crowd for any length of time. Besides, he has already stood up for a lot.

Sardon has been fighting for equal rights since 1937, when at the age of 24 he organized a group called the Consolidation Tenets Association to fight real estate companies in Chicago who charged blacks exorbitant rent compared to other races. Later, he started the Negro Labor Relations League and campaigned against companies that refused to hire black workers. They picketed theaters, phone companies, banks, and trucking companies.

“In 1959, Black people in the city had $92 million on deposit at First National Bank in Chicago and there were no blacks on staff; not even scrubbing the floor,â€ says Sardon.

“We picketed stores, demonstrated and spoke on street corners of the city. His demonstrations against the top Chicago companies served to create jobs for black people in city banks, on construction projects and in public service jobs.

Even though Sardon’s life work has been to extend civil rights to black people and create jobs in their communities, he doesn’t think that Obama, if elected president should “show his blackness.â€

“He will be the president of the entire country. Whatever he does has to be fair to all citizens; white, black, green or red. I expect that he will and

Florida May Swing for Obama