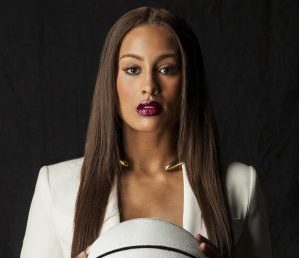 According to the press release, “Diggins is a five-time USA Basketball gold medalist; two-time WNBA All-star starter; Â a 2015 ESPY winner; 2014’s WNBA Most Improved Player; Â and a four-time college All-American.” While playing for Notre Dame, Diggins was ranked first in points and steals and led her team to a record of 35-2. Now a point guard for the Dallas Wings, Diggins considers herself to be a fitness guru and growing fashion icon. She aspires to be a role model for young women and girls, proving that “it’s possible to be a strong woman in the spotlight.”

As executive producer of Little Ballers Indiana, anÂ NAACP Image Award nominee, Diggins teamed up with Lupe Fiasco, Amar’e Stoudemire, and Crystal McCrary, the creator and director of the critically-acclaimed BET docuseriesÂ Leading Women and Leading Men, to bring the series to fruition.

“As a content creator, it is extremely challenging to get programming on television that shows young black girls and their positive relationships with their fathers–depictions that are not caricatures or rooted in comedy,â€ says Crystal McCrary, director ofÂ Little Ballers Indiana,Â in a released statement.

“One of my goals in making the Little Ballers series was to show the strength and complexity of black families. It was also important to be a champion for our girls, to celebrate their strength, their differences, their brilliance: Strong girls, unapologetic girls, conscientious girls, deaf girls, girls with vitiligo, mixed girls, girls who don’t back down, black young girls who love their hair, their skin, their bodies, their fathers, their mothers, their families, their communities,â€ she adds.

According to a press release, Little Ballers Indiana joins the NickSports primetime TV block, which airs on Nickelodeon’s Nicktoons cable network channel every Friday night from 9 p.m. to 11 p.m. (ET/PT) and features a lineup of sports themed content, including series, specials, and documentaries from professional leagues and key athletes.

Thinking About Snapping Up Snap Stock? You May Want to Think Again…