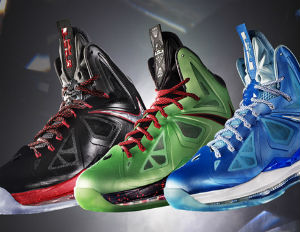 Miami Heat all-star forward LeBron James said he was confused by backlash over the $270 price tag of his new LeBron X sneaker because iterations of the sneaker were offered at different price points.

James characterized reports this past summer that his new shoe could retail for as much $315 as incorrect in an exclusive interview with the South Florida Sun Sentinel. Nike initially disputed the claim as “inaccurate.”

Among James’ critics was the National Urban League.

“We have great technology and they do a great job of putting out great shoes and things of that nature. But it just bothers you when things aren’t always correct. But other than that, we move on and we get the real facts out there and we live with them.”

The Sun Sentinel says that it asked James if he was involved in the pricing of his shoes, to which he replied, “We just try to do a good job of continuing to innovate the shoe game. Like I said, it’s great technology out there. We go around asking kids and asking people who love shoes what they like to see in shoes and we go from there.”

If there was any wonder why the shoe was so expensive, its inspiration comes from diamonds. Soon, James will have a nice piece of jewelry himself. He is coming off perhaps his best season, with averages of 27 points, eight rebounds and six assists per game. He led the Heat to the NBA championship and capped his year with an Olympic gold medal in London.

“Every diamond tells a story,” says James in a Nike advertisement for the shoe. “They are unbreakable. The hardest substance known to man, yet one of the most beautiful. Over billions of years, deep in the earth, extreme heat and pressure turns carbon into diamond. Heat, time and pressure, three things I definitely relate to, and inspiration for my tenth Nike shoe.”

The shoe boasts ‘Nike Plus’ technology not offered in some of the lower price points.

“Quickness, hustle, vertical, Nike Plus basketball tracks them all,” James continues in the ad. “How high you jump, how quick you are and how hard you play. So you can compete against your friends, your rivals and yourself, every time you play. Nike Plus basketball allows you to see your game like never before.”