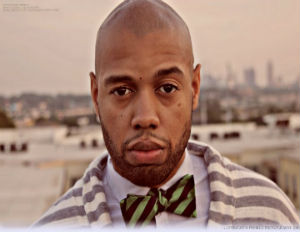 The phrase “follow your dreamsâ€ is often quoted but rarely practiced. However, this is not the case for Brooklyn-born and Atlanta-raised lawyer-turned-rapper Gilles. Gilles Walters is an associate at one of the top boutique law firms in the Atlanta area but spends his nights cutting music and cultivating his craft. Not the typical career route for an attorney, right? Thankfully, Gilles is not your typical attorney.

His love of lyrics and rhyme began while in law school at Howard University in Washington, D.C., and hasn’t stopped since. Now known in the underground rap circuit, Gilles continues to gain traction nationwide, while continuing to break stereotypes. More than ever, Gilles is focused on living out his dreams—even if that means leaving the comfort of his legal career.

Off the heels of the release of his debut EP, Successfully Lost, BlackEnterprise.com talked with Gilles about the challenges of breaking into the music industry and getting into a totally different professional path:

BlackEnterprise.com: Rappers come a dime a dozen nowadays. What makes you unique?

Gilles: My perspective and presentation have a lot to do with it. Honestly, I rap about regular stuff. I rap about relationships, where I come from—both culturally and geographically—what I’ve learned, and any other random things I may have picked up along the way. I’d like to think I express those ideas in a way that is uncommon for the genre thus far. However, I guess I’ll have to let you be the judge on that one.

How do you balance being an attorney and pursuing your rap career?

That part is pretty easy. As an indie artist, I am also the chief financier of this music. So if you think about it, the law makes the rap possible. As far as the process is concerned, ideas are always flowing so I never stop creating, even at work. Make no mistake about it, though, I’m an artist first.

What have you learned about the music business that you wish that you knew when you first got started?

That music is just about the smallest part of it.

Do you ever think about quitting your day job and pursuing music full time? If so, what’s stopping you?

That is ultimately the goal. The plan now is to create a few streams of revenue from music where I can make that transition without shirking my responsibilities. No kids yet but, I certainly have more than enough bills, and they won’t be going anywhere, whether I call myself a rapper or a lawyer. I’d best be calling myself “employed,” I know that much.

When you first started recording the album, what were your expectations going in?

When I started working on the Successfully Lost EP, my expectations were only to meet my own goals: 1. Prove I could rap and 2. prove I could make a good song–that is, some clever verses and a dope hook.

Was the response what you anticipated?

At the end of the day, I believe in this music. My team believes in this music. So when we get out there and wave the ‘Gilles’ flag high, we expect people to walk away being happy with our product. To that extent, we’ve achieved very moderate success. We still have a long way to go but, we’d be fools not to use the positive feedback we’ve already received to reinforce what we’re doing and where we’re going. Our day-one supporters help us steer this ship.

The landscape of hip-hop has drastically changed over the past decade. What do you think are the pros and cons of these changes?

Well, with so many different media outlets and opportunities, it seems there are more ways than ever to make your way. That’s a definite pro. The overwhelming con for me is probably related to that same pro: That is, because there are so many ways to “make it,” there are also so many artists trying to, yielding God-awful music in the process. Being a rapper isn’t even cool anymore. I guess it’s just assumed that more than likely, my music will be bad. Â I’m always down to prove some folks wrong, but I still need y’all to listen that first time.

Do you have any advice for those who want to make a transition into totally unrelated professional waters to pursue a dream?

The only advice I ever give is to have a plan. As you may be able to tell from the fact that I spent a great deal of my life in school becoming a lawyer just so I could turn right back around and become a rapper, I’m a dreamer. Dreams are the easy part. But it’s the planning and the work that makes the difference. I’m not speaking to you from the finish line but what has proven successful for us thus far has been our commitment to planning and then the work to execute that plan. We pound that pavement.