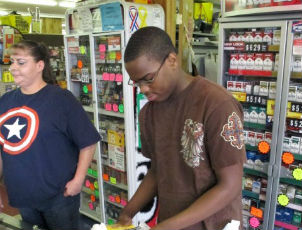 From The News Journal

A Texas man is suing a grocery store after he was banned for complaining about a black man bagging his groceries.

The man, Dewitt R. Thomas, was buying groceries. When he saw that the man bagging his groceries was black, he said: “Wait a minute, don’t touch my groceries. I can’t have someone negroidal touch my food. It’s against my creed.â€

The cashier reportedly yelled at him and ordered him out of the store.

Thomas returned to the store two days later and said he didn’t want a “negroidal” touching his groceries.

Read more at The News Journal

VP Joe Biden Tells Black Crowd: “Romney Will Put You Back In Chains”