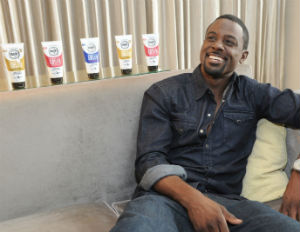 Recently, award-winning actor Lance Gross boarded a plane to China with 60 students from Howard University’s Freshman Leadership Academy. Serving as the program’s first global ambassador, the Howard alum accompanied the students on the trip as they examined practices in education, business, and leadership, while also learning about China’s unique culture.

“I am very impressed with the Freshman Leadership Academy and honored to serve as its first global ambassador,” Gross says in a Howard University press release. “I wish this program had been at Howard when I was a student. Every parent, teacher, professor, adviser, and employer should support making international experiences an essential and affordable component of a well-rounded education.”

The Freshman Leadership Academy was founded in 2010 with a goal to help first year students have a more global perspective on academic subjects and real world issues, while also helping them to build their leadership skills. It’s sponsored by the Office of the Vice President for Student Affairs in conjunction with the Howard University Student Association. This year, through fundraising efforts, the students raised $145,000 for their trip to China.

While in China, FLA students will visit historic landmarks such as the Great Wall of China, the Shanghai World Financial Center, and major U.S. companies that are doing business in China. They are scheduled to return on August 3.