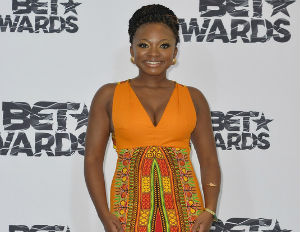 Remember the high school-er who designed her very own epic prom dress? Well, she’s moving on to bigger and equally epic things. Kyemah McEntyre, 18, designed her first ever red carpet look for singer/actress Naturi Naughton, which she rocked this past weekend, according to Buzzfeed.

Naughton is a former member of the girl group 3LW, and wore her McEntyre original on the BET Awards red carpet, Sunday June 28th. The African inspired look is only McEnytre’s second design, and the results were breathtaking.

“[Naughton] explained to me that she wanted to connect with her African roots as well,â€ McEntyre told to Necole Bitchie. “I explained to her that my prom dress was my first design ever, and that her design would be my second . . . She wanted to shed light on young people from her community [East Orange, New Jersey] and that she did. I enlisted a local seamstress by the name of Markell Mockabee, who brought my design to life.â€

The young designer says her main goal is to inspire other women to be themselves and express their self-identity.

“It’s just amazing to be celebrated for just being myself,â€ McEnytre said in the interview. “I consider myself to be an artist, fashion designer, and self-identity activist,â€ she says. “I wanted to inspire little girls to be themselves.â€

McEntyreÂ tells Necole Bitchie she will be attending Parsons School of Design in the fall. The school is alma mater to notable designers such as Donna Karan, Tom Ford, Marc Jacobs, and Prabal Gurung.