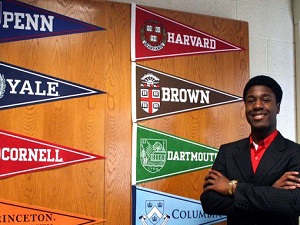 New York high school student, Kwasi Enin, picked Yale University as his college of choice after narrowing down his options of acceptance letters from not one, not two, but all eight of the Ivy League colleges.

He made the big announcement Wednesday in the gym of William Floyd High School in front of teachers and media and admitted that it was his visit to the university’s Connecticut campus that helped him finalize his decision.

“I met geniuses from all across the world. And everyone there was so friendly and inviting…And I believe that their deep appreciation and love for music, like I have, was very critical for me deciding to go there,” CNN reports him saying.

RELATED: Akintude Ahmad Has a 5.0 GPA and is Headed to Ivy League

He hopes to pursue a career in medicine and advises any future college applicants to “follow [their] passions in high school and not just follow suit for what [they] think can get [them] into these schools.”