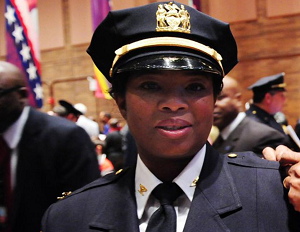 Later this month, the 30-year veteran and mother of two will be promoted to chief, making her the highest-ranking black woman in the department’s history. A close source with knowledge about the move tells the NY Daily News that Royster’s promotion comes with a transfer to the NYPD Personnel Division where she will be responsible for streamlining recruitment efforts for the police academy.

Joining the NYPD in 1985 as a police administrative aide, Royster’s promotion comes during a time when tensions between the black community and police forces across the nation are high. While New York City Police Commissioner Bill Bratton has made promises to diversify his force, a close police source makes it clear that Royster’s position was given to her based off qualified experience and not race.

“She was in Internal Affairs, she was a precinct executive, she worked in the Office of Management Analysis and Planning,” the source said. “She has a macro view of the department.”

While Royster has declined to comment in detail about her new position, she has made it clear that she is looking forward to her new assignment.

“This is a great opportunity to be a part of Commissioner (Bill) Bratton’s plan to prepare our department to be the leaders of policing in the 21st century,” she said.

An Education Opportunity for Those Paying Their Debt to Society