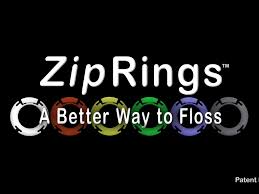 Techpreneur Victor Prince has invented a better way to floss with his Zip Rings, whichÂ  allows you to use any type or brand of ordinary dental floss without winding it around your fingers and hands. To help finance Zip Rings, Prince launched a KickStarter campaign to raise $10,000. While he reached his initial target he is seeking close to $12,000 as his stretch goal in order to be able to add more features as well as for additional production and fulfillment costs. The campaign is in it final hours ending on Friday, February 27.

[Related: Nate Parker, Entrepreneur Dawn Fitch and More to Appear on Our World]

Flossing with ordinary dental floss remains the only method of interdental cleaning approved by the American Dental Association (ADA).Â  Amazingly, the basic method of flossing has not changed since dental floss was invented in 1815 by Levi Spear Parmly, a New Orleans dentist, who advised his patients to use a thin silk thread to clean between their teeth. Yet, most people find traditional flossing methods difficult, messy, uncomfortable, unsanitary and extremely wasteful, notes Prince.

Zip Rings cuts in half the amount of floss wasted with traditional griping techniques and eliminates the mess and unsanitary conditions created by used floss coming into contact with the fingers and hands. “It also eliminates the difficulty and discomfort and makes it easy to floss those difficult-to-reach locations, even when the floss is wet with saliva and other yucky stuff,â€ says Prince, who grew up an “army bratâ€ who spent eight living in Germany by the time he was age 17.

Prince is the husband and father of two adult children who brushed and flossed regularly–they now have great teeth, as he jokingly likes to boast. “While brushing cleans the surface of the teeth, flossing is necessary to clean out the gaps between the teeth, where food and bacteria often gets caught, accelerates plaque build-up, and can lead to cavities, tooth decay, and gum disease. Left untreated, gum disease can lead to other severe health conditions, such as heart disease, diabetes, and a high body mass index,â€ he explains.

Despite these serious consequences, flossing on regularly basis using the proper flossing tools and techniques is also one of the most difficult personal health habits for people to develop and incorporate into their daily health and grooming routines, he adds.

Like most product ideas, Zip Rings mostly originated from frustrations that Prince faced in everyday life. “I have always had an entrepreneurial bent, consciously looking for opportunities to create products that solve problems people care about.Â .Zip Rings is one of a long list of product ideas I track in my notes app on my phone,â€ says the founder and president of Zip Rings Inc.

“I wanted to make sure that my product and company would have a reasonable chance of raising the needed capital. Zip Rings will not require the amount of capital as some of my other ideas and certainly will not require the huge amounts of capital so easily raised by other technology companies,â€ explains Prince, who holds a Masters in electrical engineering, Cornell University, and a MBA, Stanford Graduate School of Business. “The Kickstarter campaign is only the beginning of the process and serves more of a strategic purpose. ”

As he sees it, Zip Rings is a great product, “because if only 3 in 10 people buy it,Â that would make it conservatively a $700 million product in the US or $1.4 billion worldwide. “Even if someone argues that these numbers are a little optimistic, my point is that the market opportunity is huge and I’m having so much fun chasing it,â€ he stresses.