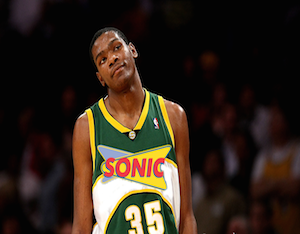 NBA MVP Kevin Durant might be out with an injury, but that’s not stopping the endorsement deals from rolling in.

Yesterday (Nov. 20), the Oklahoma City Thunder point-forward continued to prove that he’s good money when the 26-year-old signed on with fast food drive-in chain Sonic to be its first-ever athlete ambassador. “Everything that Kevin pitches comes from an authentic point of view,” Michael Yormark, president and chief of branding and strategy for Roc Nation, said. “When it comes to grab-and-go food, KD’s a Sonic guy.”

Durant, who has the most endorsement deals of any player in the NBA, hinted at his newest partnership on Wednesday via Twitter, saying, “Getting excited to announce my newest partner … the name is gonna be familiar.” Thursday morning, Durant followed up with a tweet that spotlighted his excitement of working with Sonic on a variety of healthy options for their menu. According to ESPN, Durant had to get approval from Kind Snacks, so he wouldn’t position himself in a way that would be unhealthy for his and their brand.

The fast food brand is a staple in Texas, where Durant played college basketball, and Oklahoma, where he is a professional. They expanded to 16 new states since 2005 and is the only burger chain in the U.S. that gained market share in the past year. In addition to that, Sonic plans on opening 1,000 drive-ins in the next 10 years. Durant has a host of endorsements from Orange Leaf to Sparkling Ice, a zero-calorie sparkling water brand, BBVA Compass Bank, Skullcandy Headphones. Other deals include Panini, the Oklahoma Department of Health, and Neff, an underwear collection that will debut next year. He also signed the largest shoe deal in history, agreeing to terms with Nike on a 10-year, $300 million deal.

The Oklahoma City Thunder, without Durant and Russell Westbrook (broken bone in hand), are currently sporting a record of 3-10.

Google Hangout: What Does It Mean to Live ‘The Good Life’?