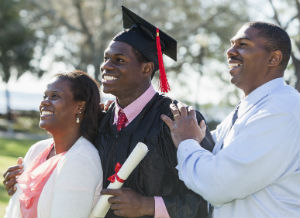 High school graduation rates for low-income students are, on average, 15 percentage points lower nationally than for their higher-income peers.

Not true in Kentucky.

“Kentucky is a state with rates of poverty that exceed the nation’s, but with graduation rates for low-income students that are its envy,â€ writes John M. Bridgeland, president and CEO ofÂ Civic Enterprises, and Robert Balfanz, director of theÂ Everyone Graduates CenterÂ at Johns Hopkins University, in the foreword of a new study.

The two organizations released For All Kids: How Kentucky is Closing the High School Graduation Gap for Low-Income StudentsÂ this week to provide insights to other states and districts working to close graduation gaps of all kinds.

Kentucky’s graduation gap between low-income students and their peers was just 1 percentage point in 2013 and 7 percentage points in 2014, showcasing “steady improvement since 2003.â€

The report’s authors, Joanna Hornig Fox, Erin S. Ingram and Jennifer L. DePaoli, cite four factors that have contributed to the state’s progress “in an era of higher standards and at a time when the number of low-income students has dramatically risen.â€

But this work takes time and tenacity, the report notes. Without “steady, persistent and focused leadership and commitment to children and the state’s future, it is doubtful that the reforms that KERA began would have made such positive changes.â€

6 Tips to Tighten Your Work Meetings