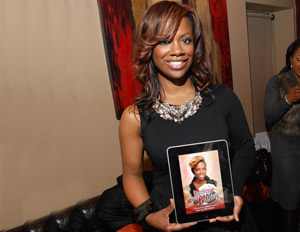 Playing video games all day may be perfectly fine for a college student, but the same usually doesn’t apply to men in their 30s and 40s. That’s unless you’re entrepreneurs Clemille “CJ” Peters, Jr., 34, and Marcus Matthews, 40, who not only play games but make them as well. The pair of Atlanta residents run Konsole Kingz, a company that uses promotions, event planning, gaming tournaments and marketing strategies to help video game companies tap into urban markets. After working with industry giants like Sega Sports and Rockstar Games, the pair recently released Kandi Koated Spades, an Apple Store spades game that’s endorsed by singer/songwriter and Real Housewives of Atlanta star Kandi Burress.

Black Enterprise caught up with Peters and Matthews who reveal what role Twitter played in partnering with Burress, how folks like Tyler Perry and Spike Lee inspire their business model, and why they would prefer to have more competition.

Black Enterprise: How did the concept for Kandi Koated Spades come about?

Matthews: We wanted to do a Black game that was accessible. I grew up playing tonk and spades, and I would say sometime in mid-2000, I went to my family reunion back in Jacksonville, and everybody busted out spades tables and cards and I was like, “Man, this was made for mobile. It’s a multiplayer game, it’s simple, people like to talk trash, it’s social, and it’s something that everybody knows, so casual people will play. It’s not like some new game where you have to learn the rules; everybody knows how to play spades in the Black community. You’ve just got to put the right product out there…

Why did it take so long from when you first had the idea for the game to come out?

Matthews: I started conceptualizing it in the mid-2000s, playing around and doing some stuff but couldn’t find the time to focus on it because I was dealing with other projects. When me and CJ hooked up, I told him about it. He’s a bigger spades player than me, so he was into it from the rip! So we just had to find the time and situation. Two years ago, before the iPhone came out, I started on a design. When the iPhone came out, it became a clear, strong platform. I redesigned the game on paper for the iPhone, and I started going down that path. I knew I wanted to work with a celebrity, someone who could bring some attention to the game, who was a gamer ideally. When CJ got involved, he really helped crystallize some things.

What did you bring to the table that was missing?

Peters: When I got involved, I was gathering all the rules and doing all the game play stuff. I was basically the game play producer; making sure it has the right feel, and that the [everything was] represented. I’m always on Twitter–if you’re not following me @KonsoleKingz, you probably should [laughs]–but I use Twitter as market research.

One night, I was throwing out tweets about how you play spades and Kandi replied to my tweets. We had a tweet exchange back and forth, going over rules, and after we did that, it started to form in my head. We were already looking for a person that everybody liked [to endorse the game] and Kandi fit that mold–she had a show coming out, and was going to be all over TV… [Marcus] liked the idea. I knew people that knew her management, we bought [the idea] to her and she liked it.

How involved was she in the actual creation and direction of the game?

Peters: We wanted her to have real input, so we’d give her test inputs of the game and let her play. She wanted certain nuances how she played in the game, so we put those in there. When you win and lose, we have quotes from her pop up, so it feels like she’s watching over all the games being played. We got her to do videos for it. She’s involved, she’s not just like, “Use my name and go.â€ She comes to the office, sits down and we talk. 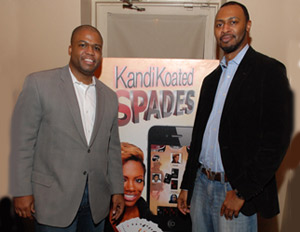 A big thing that many people love about the game is that it includes many of the varying rules of how to play spades. How hard was it to create a program like that?

Peters: To make a good, great polished game, is very hard. Marcus put a lot of late nights into this game, getting it right. It’s hard to do it right. There’s only been one attempt by somebody, but it hasn’t been companies really [making it regularly]. But we know how this game impacts the Black community, the minority community, the urban community, however you want to say it. We know it resonates high, we know people get really emotionally involved in this game. If we bring that same feeling and that same passion, and do it right in the execution, people are going to feel the same way when they play the game on their phone.

Matthews: I’ve pitched similar concepts to mainstream gaming companies back in the early 2000s, and we didn’t get any serious nibbles at all. When Tyler Perry went to pitch his first movie, Diary of a Mad Black Woman, he got rejected by every single Hollywood studio. The only one that bit was more of an indie studio, Lionsgate, which is not a major player–they’re based in Canada or Vancouver–and he had to put up most of the money. They put up $2 million, he had to put up $3 million. They didn’t even have enough confidence to give him $5 million for a big budget movie. That tells you most mainstream entertainment companies don’t understand the Black audience most of the time, and it takes people to do what Tyler and Spike Lee did to get your voice heard and out to markets. That’s pretty much what we’re out to do.

How do you feel about the success of the game thus far and getting placed in the Apple Store?

Matthews: In some ways, for me, it’s kind of surprising and disappointing, I don’t think there’s any other Black-oriented apps that are really doing well in the Apple Store right now. We’re one of the only Black-focused apps where Black people can come, hang out and socialize, and that’s made for them, that’s on top of anything right now. I wish there were more Black-focused apps and developers out there right now that are putting out content with things we can download.

What kind of success do you feel you guys have to have to open the industry’s eyes?

Matthews: Part of me is hoping that if we break though half a million apps, and you have one that’s broken in the top 1,000 of all apps, but we need more and a better representation. More people trying to do it, and do it right–put more money into it.

What is the profitability of mobile apps right now? It seems like there’s a lot of room to profit, with the consistent growth of Android and Apple. But it also seems like jailbreaking or app hacking would hinder that. How is it as a business model?

Matthews: I think in some ways, it’s a little better than doing Web development. It’s the same thing as building a Website. The barrier entry is fairly low, not as low as doing a Website but just like with a Website, if you can find that right voice and that right niche, that right marketing thing to gain visibility, you can make money. I think the same thing exists in apps. In general, I don’t think jailbreaking is a huge portion of downloads for games and apps, because the type of people that play games are casual fans, and they don’t want to take the time to jailbreak. It’s always a techy person, a high school or college student that’s hardcore anal about not paying or doing that kind of stuff, that jailbreaks their phones.

A lot of guys on Konsole Kingz have iPhones, I only think one has jailbroken their phone. The other dudes are like, “I don’t have time for that stuff.” It’s not easy, it’s harder to get updates because they’re always doing changes with the OS (operating system). Most people say, “These apps are two or three dollars, the cost of a value hamburger, it’s not worth the hassle. Maybe if these things were $30, $50, it might be a bigger issue. The question is really, just like with any platform–movies, books, video games, apps–do you have something people want to buy? If you know how to create something people want to buy, you’ll make money as an author, you’ll make money writing apps, you’ll make money making a Website.

Peters: If they like your product, they’ll support it. Within Konsole Kingz, that’s one of the three things that we do. We’re looking at creating different revenue streams to build companies stronger. We look at apps as encompassing those–as Black guys creating something that’s rooted. People can see that and applaud that, and at the same time, we can hopefully make some great money off of it.

New Job Skills to Fine Tune for the New Year

Iowa Caucus 2012: The Candidates’ Positions on the 4 Main Issues