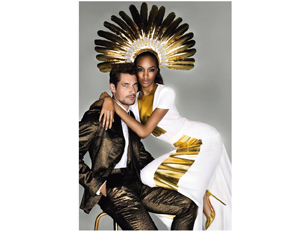 British Vogue’s halted white streakÂ may beÂ a cause for celebration or a slap in the face, depending onÂ whom you ask. While someÂ fans are reposting and retweeting the glossy’s latest cover featuring an effortlessly stunning Jourdan Dunn, some critics are taking to the media to express their gripe with the fashion industry’s lack of diversity.Â Dunn has appeared on the cover before, but never as a solo model. The last black modelÂ and cover girl to grace the magazine’s front was Naomi CampbellÂ in 2002, nearly 13 years ago.

Although the lack of diversity in fashion is far from a new discovery, this instanceÂ proves a little more shocking simply because many of Dunn’s model peers, also from the UK with comparable levels of success, have had their moment on the cover. Cara Delevingne, Georgia May Jagger, Kate Upton and Freja Beha have all gotten their alone time as British Vogue cover girls. In fact, Styleist.com reports that Delevingne covered the magazine twice in 2014, “as did Kate Moss, who has covered the glossy at least once per year since her career began.” The British beauty has actually spoken up about the fashion industry’s racial bias on several occasions. She once sarcastically tweeted, “Ahahahahahaha I just [got] cancelled from Dior because of my boobs! Iâ¤ fashion #Couture.” She added, “I’m normally told I’m cancelled because I’m ‘coloured’ so being cancelled because off [sic]Â my boobs is a minor : )” With a more serious stance, she addressed the issue again with a Fashionista reporter. When asked if she’d seen any progress in the industry since her career, Dunn responded, “I mean, there was a season where ethnic models were being represented and then it went back to the same routine of just using one or none at all. It seems like [non-white models] are only cast when it’s hot for one season and everyone jumps on board. It’s a look.”

As in the corporate world and other varying professional arenas, there is a disturbing lack of diversity among the fashion industry, ultimately affecting the financial well-being of minorities working or aspiring to work in that industry. While ideally fashion titans will better serve minority models and designers, that solution is not a guarantee. But one solution that is more likely to make some tread is the increased support of black fashion figures. Black consumers patronizing more black designers puts black designers in the financial position to then hire black models. With a $1 trillion buying power, the black American community could potentially diversify the fashion industry without waiting on the powers that be.

Twitter Chides Media For Lack Of Coverage Over #NAACPBombing